Day two of #wdnwc14: of workshops and friends 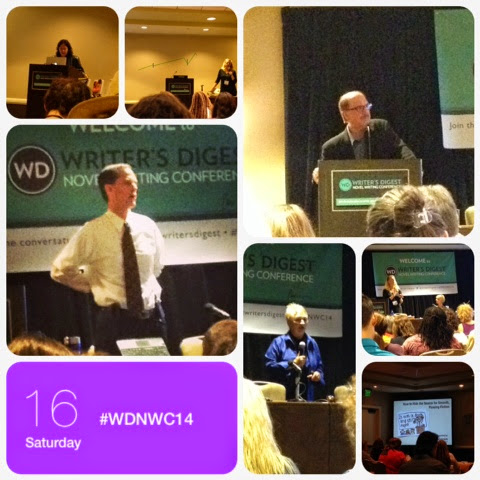 Today's programme was chock full of really informative sessions. I don't know if I've finished processing everything yet, but I can say this - at every session I feel like a sponge, soaking up stuff, wondering if I'm going to start leaking. Which isn't a bad thing.

Also, I'm hearing stuff that makes me go 'hey, so maybe if I applied *this* and added *that* it would make my story go much better.

One was definitely the Writing Active Setting session, which talked about how even how you describe a scene can be put to good use to show facets of your character, or even build conflict and tension.

Bits of the plotting workshop tied back to Larry Brooks' session yesterday about the first plot point and I'm going 'those bits in my NaNoWriMo drafts that I thought were conflicts... I think they were really the first plot point or maybe even just an inciting incident. No wonder it seemed so stuck.'

But it's not just been workshops. In between I've made friends, Howard, Luke and Naomi, to name a few, and met a fellow accountant who's in the middle of edits (whose name I forgot. Oops.)

Looking forward to the final few sessions tomorrow (no Hugh Howey, bummer) and maybe making a few more connections before heading back to San Jose and being boring.
Posted by Anna Tan at 3:20 pm