#booklaunch #guestpost: How the Dwarf kept his beard: Adapting a Fairytale to a Novel 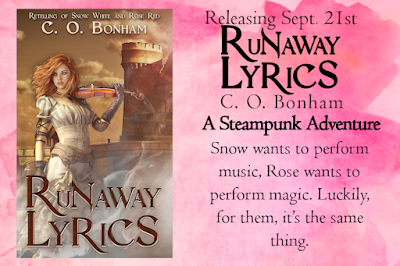 So today's the release day for C.O. Bonham's new novel, Runaway Lyrics! Before we take a look at the book itself, here's a guest post from Bonham.

How the Dwarf kept his beard: Adapting a Fairytale to a Novel.

So the story of Snow White and Rose Red is odd. Here’s the TL;DR:

Snow White and her sister Rose Red live in a house in the forest with their mother. They are very sweet, get along well, and are kind to all the forest creatures.

One Winter night, a bear shows up at their house, and they welcome it in and become friends. He stays until summer, then leaves. The girls miss him, so they head out into the woods to find their gentle bear friend.

The girls meet a dwarf whose beard is snagged in a tree/bush/bramble (It varies). Snow cuts his beard free, even though he tells her not to. (I thought she was kind?)

They meet him again, and his beard is tangled in a fishing line. She cuts the beard again. When she could have just cut the line. (She doesn’t care about other people’s wishes much.)

Then he is carried by an Eagle. They throw rocks at it and it drops him. (Don’t they know they could have killed him?)

Anyway, the dwarf is angry and wants to attack them. (Can you blame him?) But the bear saves them and scares/kills (it varies) the dwarf. It’s okay because the dwarf is the villain for not being grateful. The bear turns into a prince and marries Snow White, and he has a brother who marries Rose Red.

Long story short: Snow White is sweet and kind, but she doesn’t respect the dwarf enough to not cut his beard. 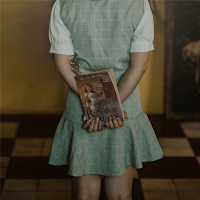 So I thought, how can I make her kinder? And it turned into a weird message. She isn’t super sweet or nice to the dwarf. He is wasting their time and it would be so easy to just cut his beard. But she respects his wishes and finds another solution.

The story kind of snowballed from there. There’s a difference between being kind and being polite. Some of the worst serial killers in history had pleasant manners and friendly personalities.

Some of the rudest people can be very kind. Once, I was on the side of the road. Car after car passed me by. Finally, one stopped. The guy got out, asked what was wrong and then fixed the car for me. (The problem was embarrassingly simple, so no, I won’t tell you what it was.) He didn’t introduce himself, didn’t make small talk, just fixed it, waved off my offer of payment, and left.

He was very kind to stop and fix my car, even if others wouldn’t have called him friendly. In fact, a super friendly man might have set off a ton of red flags that would have made me hesitant to accept his help.

So the moral of the story: Kindness is not equal to politeness.

I looked at all the girls’ encounters with the dwarf and came up with new solutions, and I made Snow a little put out to emphasize my point. Then the hard part came. How to make a novel out of this.

I made the Bear prince kind of gender-swapped Snow White with the evil stepmother thing. I wanted a dragon, and I knew I needed to give the younger prince a bigger role. Then I wrote until all these random elements made sense together.

The younger brother got a name and a personality and then his part in the plot just exploded from there.

The girls’ each got a motivation, and it turns out that their mother had an excellent reason for living out in the middle of nowhere.

The main prince is still turned into a bear for no good reason. There is never a good reason for turning people into bears.

I added Steampunk because every story is better with steampunk.

So ends the tale of a problematic fairytale turned steampunk adventure novel.

Now go forth and be kind. Even if you can’t be polite while doing it. 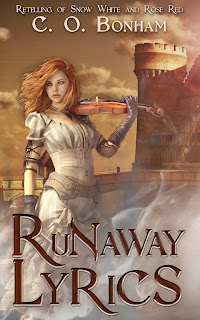 What one sister has, she must share with the other . . .

Snow loves music. She has spent her entire life learning, new instruments and memorizing new pieces, only to while away her life in a country manor with only her mother and twin sister as company. If only she could get out on her own and play in front of a real audience.

Rose loves magic. The things she can do with music would amaze her twin sister, but whenever she shows her, Snow quickly forgets as if the event had never happened. If only Rose could get out on her own and work some real magic.

When an airship crashes near their home Snow’s magical abilities awaken. Together the sisters must learn to use their magic, rescue a pair of cursed princes, and discover their own secrets.

Discover the magic of music in this retelling of Snow White and Rose Red.

C.O. Bonham is the pen name for a commonly misspelled first name. She loves stories of all kinds, but really likes the ones that are weird, and outside the norm. A certified book geek, when she isn’t writing stories of her own, she is busy reading stories by others. A homeschool graduate with a degree in creative writing, her goal is to create stories that make people think, feel, and have fun.

Visit www.cobonham.com to read author interviews, book reviews, and to hear about what she’s working on next.

Sign up for her newsletter to make sure you never miss an update!

I figured since I binge-read the whole series, I might as well just put up all the reviews in this post! :) I'll hide the second and third behind the read more so you don't get spoilers, if you don't want them.

Magicians' Rivalry by H.L. Burke
My rating: 5 of 5 stars

Auric Spellsmith comes home from the city to find his expected place at his father's business filled by a terrible upstart of a carpenter, Jericho Carver. Jericho just knows that whatever future he thought he had as a magician apprentice is over now that Master Hedward Spellsmith's son is back. But when Hedward Spellsmith disappears and Fey Magic threatens the human world, Auric and Jericho must learn to work together - or lose everyone and everything they hold dear.

Magicians' Rivalry is a fun, engaging, and quick read! The rivalry between the two men is hilarious and poor Rill Spellsmith, Auric's younger sister, is caught trying to placate all the easily riled, arrogant, posturing men in her life - while trying to learn magic without her father's knowledge.

About that - Hedward Spellsmith comes across at first as a misogynic old man but as the story unfolds and his past comes to light, you learn that he is anything but - it's just that he is a terrible communicator and refuses to explain why he's doing the things he's doing...until it's too late.

The one thing that felt a little off was how quickly Auric claims Jericho as his best friend. I mean, well Jericho did save him a few times in the Fey lands...but does that naturally make them best friends? idk.

Anyway, I'm just here for the proud, self-sacrificing idiots who keep landing themselves into trouble because they won't actually talk to each other or admit that they need help. Oh, and of course for Jaspyr, the magical clockwork fox.

Before we get to the rest, Magician's Gift (Spellsmith & Carver 3.5) is free for a couple of days.


It's a short story that'll give you a preview of the main characters if you're still ambivalent! However, it's set at the end of the series, so might include some relationship-type spoilers if you're fussy about that.

Toyols 'R' Us starts off like quite a normal police procedural then veers quickly into magic. Inspector Khairul is at his wit's end trying to solve a series of deaths (murders, he thinks) that only have one apparent connection: a hacked off big toe and a body drained of blood. Elsewhere in Klang Valley, Harun introduces his cousin Ismail to a secret that can solve all his monetary woes: toyols. On the surface, Toyols 'R' Us aims to help people secure their financial future, albeit in not-quite-legal ways - but what is their super enigmatic owner hiding behind his cheery demeanour?

If you've ever read one of Terence Toh's short stories, you know exactly what to look forward to in his debut novel: an utterly Malaysian story guided by and wrapped in punnery and wordplay. And since puns tend to be somewhat divisive, you may end up laughing your head off... or rolling your eyes so hard it hurts. I think I did a little of both.

In between the wit and the fun, Toh doesn't gloss over the darker side of Klang Valley. There's that one-upmanship, the constant competition to be better, richer. The rampant corruption and cronyism. Religious extremism and cyber trolling. Unwanted pregnancies and abortion. Loan sharks and gangs. In some ways, it feels a little like an extension of the KL Noir series. Both obliquely and blatantly, Toh seems to include an underlying commentary on the social issues that plague Malaysian society today.

The ending lends itself to a possible sequel - and I would definitely pick up the next Inspector Khairul & Detective Fara novel if that materialises!

It's not perfect. There's a little more POV changing than I prefer, and also a bit of an almost romance (as in, it's set up to be romantic I think but isn't quite sure what it is) that felt rather awkwardly staged. But these are really rather minor preferences that don't detract from the enjoyment of the novel as a whole.