Ripples and Other Stories by Shih-Li Kow
My rating: 4 of 5 stars

It's hard to say what I really think of this.

On one hand, I'm not a huge fan of this kind of writing. By themselves, each short story seems to be a rather banal slice of life that doesn't quite lead anywhere. There's some drama in a few of them, but in a majority of the stories, it's just a thing that happened, something that's being told; there's no inherent conflict, no quick emotional hit that we tend to look for in a short story. This thing happened, so-and-so said something, the end.

And yet, there is a certain something about the way Kow weaves the compilation together, centred around a few key characters and their families. Each person's actions, each person's story creates ripples that affect the next. The POVs shift, identities are sometimes unclear. Despite the utter normalcy and banality, there's a lingering mystery that draws the reader to want to go back and read it again to figure out where the interconnections are made, where the ripples were formed and how far they stretched. Did this thing referenced in this story really...? Is this the same person that...?

The language is fluid and beautiful; it's not the stiltedly polished English we tend to get in Malaysian literature (can you tell I'm jaded yet?). Instead, it's a true reflection of our tongues and inflections, the mix of languages that make up our everyday lives.

Ripples and Other Stories is unapologetically Malaysian in setting and in tone and definitely deserves a closer read.

Ripples doesn't seem to be in print anymore, but you can get it as an ebook via Pakka English/Silverfish Books.

#AbsolutionNovel ebook launch tour: Round up 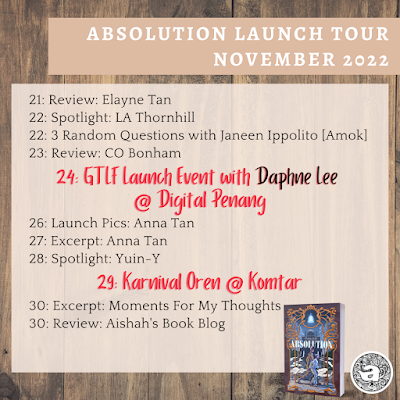 A HUGE THANK YOU to everyone who helped in our online launch of Absolution!

Here's an updated roundup of all the stops over the past ten days. 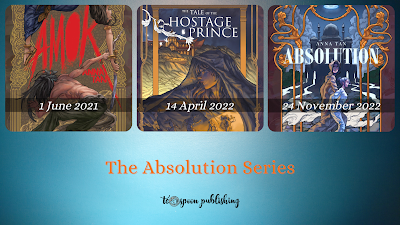 Ebooks: Amok | The Tale of the Hostage Prince | Absolution

Paperbacks: Amok | The Tale of the Hostage Prince | Absolution (pre-order)

p/s we have good news coming about the Malaysian print run.