On a private scale of internal squees, Coiled would rate somewhere between 4.5 - 5 stars. On the cosmic scale of books I have read, I'd put Coiled at 4 stars. Which is just a grand way of saying that it hit a lot of sweet spots, I liked it very, very much, but it's not the greatest book I've ever read. (And is also a fancy way of saying it falls into the category of books-I-won't-admit-to-liking-this-much because of literary pretentions.)

Two sets of twins from neighbouring countries are cursed. As they come of age, they're pitted against each other, as curing one would permanently curse the other. Soon it becomes a race--which twin will win? And what will happen to the one that loses out? Coiled is basically a fairy tale/myth with gods and half-gods, curses and magic, and a quest. Well, more than one quest. They are personal quests to break personal curses, but that doesn't make them any less valid. There's a lot of personal vendetta and family squabbling and guilty secrets.

The... thing... between Princess Laidra and Prince Calen is tooth-achingly, diabetes-inducingly sweet, and has the added advantage of being old-fashioned and gentlemanly and will-he-won't-he-WHATAREYOUWAITINGFORPRINCE, which is what I love in a good guilty-secret read, which usually involves princes and princesses, because I don't read romance [ahem]. It IS, however, clean YA, and while there are certain--allusions? Fade to blacks? Almosts?--hints of impropriety (to come and hoped for), it mainly stays in the teenage royal fantasy plane.

The serpent on the cover is also very cute.

Note: I received an e-galley via NetGalley in exchange for an honest review.

Swords Against Darkness by Paula Guran
My rating: 4 of 5 stars

I really did take about a month to finish this.
Partially because it's a really, really long book (it's really mostly an anthology of novellas!) and also because I've been running around Malaysia for most of October AND November.

Reading Swords Against Darkness was like having a crash course on the sword-and-sorcery genre. Paula Guran has put together a very educational collection of stories that showcases the best of sword and sorcery from its beginnings with Conan the Barbarian in 1933 to its current guise in 2017. The anthology features famous names in fantasy -- Michael Moorcock, Mercedes Lackey, Samuel R. Delany, Scott Lynch, and Kameron Hurley, to name a few. Those more firmly entrenched in this branch of fantasy would probably recognise many more of the authors featured, but I've always had a slightly more epic fantasy bent.

That said, there is much to love and hate about the stories in this book. For all that Conan is well known to me, at least in cartoon form, I've never actually read any of the original short stories, so the inclusion of The Tower of the Elephant (Robert E. Howard) was rather amusing. I liked it better than I expected. I initially wanted to be intrigued by Hellsgarde (CL Moore); after all, it was written by a woman and features a female protagonist. However, the story centred mostly around Jirel being tricked by men and used by men (and dead men/spirits) which didn't sit too well after a while (even if she bests them in the end). It was also annoying that deformity or illness was basically equated to being evil or cursed by God. I was rather distracted by the name Stark in Black Amazon of Mars , but I rather liked this one mostly because of the Eowyn-type. While the Gods Laugh (Michael Moorcock) was classic reluctant-hero, so there's nothing much to hate about it.

Undertow (Karl Edward Wagner) was a strange one. At first glance, it appears to be a story about a girl trying to escape from her abuser (who happens to be a renowned magician) but the ending is something else altogether. I absolutely loved Swords Against the Marluk (Katherine Kurtz) and Out of the Deep -- which basically flaunts my love for princes and royal family stories. Ha. (And also underdog stories.) The Swords of Her Heart (John Balestra) should also get a mention here for being amusing even if it only plays on bad fortune and stupidity, and poor Brimm trying to get out of all the trouble his friend Snoori gets him into.

Bluestocking (Joanna Russ) confused me a little -- probably because I was skimming by this point -- as did The Tale of Dragons and Dreamers (Samuel R. Delany), though I rather think I'd like to revisit the latter again when I have time. First Blood (Elizabeth Moon) recaptured my interest, falling neatly into that coming-of-age slot that I like. It also helps that Luden is such an earnest, innocent boy. Where Virtue Lives (Saladin Ahmed) and The Ghostmakers (Elizabeth Bear) stand out from the white, Western-centric crowd whilst Scott Lynch's The Effigy Engine: A Tale of the Red Hats reminds me that The Lies of Locke Lamora has been on my TBR forever.

There's more that I've skipped over because commenting on each story would be tedious and frankly, after reading so many over a month, I don't recall every single one of them.

Note: I received a digital review copy of this via Edelweiss.

I really should have posted this on Saturday, but I didn't want to go dig for a Music Monday song.

Which was really the worship set from Saturday's service.
Posted by Anna Tan at 9:30 am No comments:

Doctor Who: Myths and Legends by Richard Dinnick
My rating: 3 of 5 stars

If you're looking for an analysis of how these myths and legends fit into the core Doctor Who world/fandom or something like that, you're looking in the wrong place. If you want a review of how much you'd like this collection of short stories even if you're not a hardcore fan, I guess that's where this review would fit. (Note: I have watched some Doctor Who as my siblings are fans, but I'm generally too lazy to follow a TV series. Don't kill me.)

Doctor Who: Myths and Legends is a collection of shorts, mostly based in/around Gallifrey, or at least various Time Lords, that makes for light sci-fi reading. This is probably harsh judgement, based off the fact that I've just finished reading Paula Guran's Swords Against Darkness, but it is what it is: light reading. The stories are short, in some cases, almost simplistic, and some feel as if they end too abruptly. Some background knowledge about the Doctor Who universe is encouraged; I'm guessing that a true fan would decipher what was going on in The Unwanted Gift of Prophecy better than I did.

However, the stories are based on myths (well-known examples include King Midas, Medusa, the Trojan Horse, and Pandora's box; others are a little more obscure), so anyone interested in retellings of myths would probably like these science-fiction spins to those classic tales. Doctor Who fans need not fret - Lord High President Rassilon makes multiple appearances, as does the Doctor, though not in every single story. You will also meet the Daleks and the Weeping Angels.

The stories I enjoyed particularly include The Mondas Touch, The Terrible Manussa, The Angels Of Vengeance, The Jeopardy Of Solar Proximity, and The Multi-Faceted War.

Note: I received an e-galley of this book via NetGalley in return for an honest review.

View all my reviews
Posted by Anna Tan at 9:17 pm No comments:

I was reminded that I haven't been posting Music Monday songs. 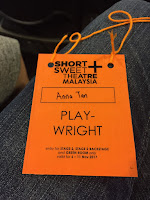 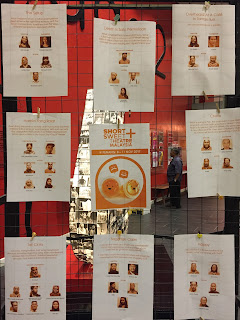 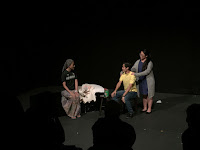 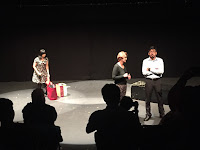 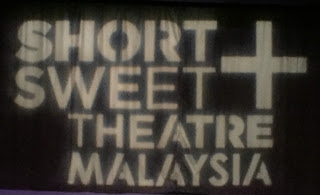 I'm taking a break from #fridayflash in November (not that I was terribly consistent before) because I'll be posting writing updates from NaNoWrimo over at my Patreon page. (Or you can just see my graph on the sidebar.)

If you want sneak previews of the snazzy new novel I'm working on, head over to https://www.patreon.com/annatsp and become a patron! You'll only be charged once I publish the novel.
Posted by Anna Tan at 12:29 pm No comments: