Storm Front by Jim Butcher
My rating: 3 of 5 stars

I didn't want to do anything over CNY so I read this instead.

I got this like a million years ago (I cannot remember which book sale lol) mostly because someone had said that the Dresden Files were a good read. And then I procrastinated because, you know, everything else is a good read. And if I ended up liking it going in, that would be a hefty investment because there are like what, 10+ books in the series? and I only have the one book...

Anyway, it was...okay? Like a crime procedural/thriller but with magic and supernatural creatures/events. Except that Harry Dresden was kind of annoying and rather useless and hopeless. It doesn't help that there are very slight hints about his "tragic background" but hardly anything is revealed in this book, so you don't really feel any sympathy for him either.

I posted this on socmed and immediately got the "you must give him a chance! It gets better in books 5 (or whatever)" And I'm just thinking...no? Like, no one else gives other writers a chance if their first book wasn't great, so eh, whatever. (I'm also thinking that publishing must have been much simpler in the way back when, because similarly, if I'd started on Terry Pratchett with The Colour of Magic I would never have read any of the Discworld books.)

Maybe the later books are a good read, but this one was just okay.

View all my reviews
---
This was January's stretch goal for the 2023 Booktempter's TBR reduction challenge! (Read in January, but scheduled for later)
Posted by Anna Tan at 9:30 am No comments:

Nusantara: A Sea of Tales by Heidi Shamsuddin
My rating: 5 of 5 stars

Nusantara: A Sea of Tales is a wonderful collection of fairy tales, folklore, and fables from the core geographic area of the Malay Archipelago or what used to be called Nusantara. A large majority of the stories come from Malaysia, both East and West (since Heidi Shamsuddin is Malaysian), and Indonesia (because both countries share quite a lot of the same folklore), which I guess automatically includes Singapore (because they were historically always linked before they became their own country).

There are a smattering of stories from other Southeast Asian countries - the Philippines, Vietnam, Thailand - and, oddly, one story each from Guam and Madagascar. Heidi justifies the latter two as being included because they share the Austronesian language. Frankly, I felt they were just a little too far away to share much cultural similarity and probably could have been kept for a later collection.

Some of the more familiar tales (to me) are several Sang Kancil stories, variations of the Bawang Putih, Bawang Merah tale, Si Tanggang, The Swordfish Attack of Singapore and The Curse of Mahsuri. Some of the other tales are vaguely familiar - whether because I have heard of/read them before in other collections or they are similar to European tales, I cannot quite tell. But quite a few were new to me, especially those from Borneo and from other countries. I was delighted to discover Pak Pandir stories for the first time. How did I not know these exist?

Heidi includes notes at the end of each tale or, sometimes, at the end of a group of similar tales. This provided a lot of background knowledge about where the story comes from (and where similar stories are told across the region), explanations of untranslated words and names (where they hold specific meanings that add nuance to the story), as well as some hidden meanings behind cultural practices that are not quite apparent face value.

Nusantara: A Sea of Tales is a timely book that collects tales from oral storytellers and
older print sources that are increasingly hard to find before they are lost to us altogether.

View all my reviews
---
And that's book 1 from the 2023 Booktempter's TBR reduction challenge!
Posted by Anna Tan at 9:30 am No comments:

Gin, Jesus, and Jim Crow: Prohibition and the Transformation of Racial and Religious Politics in the South by Brendan J. J. Payne
My rating: 4 of 5 stars

TBH... the main reason I picked this up was because I saw the cover and went "oh, that's the book my Facebook friend's husband wrote". But also, I agree with a lot of her views and I was just kaypo enough to figure why not since Edelweiss had it as a DRC for download.

It was fascinating to read about how so many things we take for granted as "Christian tradition" did not actually become "tradition" until about a hundred years ago. Which is really short when you look at how old Christianity really is. And it's also really weird to realise that so many things seen as "conservative" now were really... "liberal and progressive" ideas back then.

But it is also a deeper insight into how American Christianity dropped off the deep end.

What I did not expect to find was how uncannily racial politics back in early 1900s America align with racial politics in Malaysia in this century; you just have to replace "Christian" with "Muslim" and "White" with "Malay". Which is a terrible, terrible realisation. Except that I have hopes that our democracy is strong enough and old enough at this point to withstand the worst of it. (Bersih & #balikundi movements have been doing good work.)

But one thing the church needs to come back to is the traditional Christian understanding that:

regulating such morality was the role of the church, not the state, and the church ought not try to use the government to remove a man's liberty to choose, even if he chose to sin.

Because any time the church tries to do that, it becomes the oppressor.

Anyway! Gin, Jesus, and Jim Crow was a fascinating, if difficult, read. Which really also means I am out of touch with academic reading and I had a hard time slogging through some bits, maybe also because some of the terminology and phrasing were strange to me.

Note: I received a digital ARC of this book from LSU Press via Edelweiss. Opinions expressed in this review are completely my own.

VAMPS: Fresh Blood by Nicole Arend
My rating: 4 of 5 stars

Dillon is a Dhampire, a half-human, half-vampire reject. But he's also gotten a place at the very prestigious vampire finishing school, known as VAMPS, where he's supposed to be learning with and competing against the most elite of vampire society. Which really sucks, because he only found out about this whole... thing... a week before he was supposed to show up at school and has no clue about how vampire society works. Or how he's supposed to act as a vampire.

To put it simply, VAMPS: Fresh Blood is a kinda campy, boarding school vampire new adult rom-com, which is probably a lot to stuff to wrap your head around. Kinda Twilight X St Clare's/Mallory Towers (I'm sure there's one where like half the students were royalty or related to royalty, but I can't remember which one), where insecure 18YO vampires duke it out to be the best of the best while their parents play politics in the background.

It's actually quite a fun read once you can get through the clunky beginning where the WHOLE class is introduced and you're overloaded by too many characters too quickly. There's a bit of mystery surrounding Dillon's vampire parentage (though I kinda guessed who his mom was midway through the book) as well as surrounding why Dillon's blood is so special (science bla bla bla).

Read if you like teenage angst, love triangles, and betrayal.

Note: I received a digital ARC of this book from Simon & Schuster via Edelweiss. Opinions expressed in this review are completely my own.

Since I've got a hefty TBR and Matt over at Runalong the Shelves is doing a TBR reduction challenge, I figured why not?

Because many of my books are still in boxes after the moves (in 2019 and 2020, ha!!), I'm restricting the books even further to the current 3 open boxes and 1 shelf of unread books, plus unread ebooks on my Kindle.

The idea is that once I clear these boxes and the shelf, I can move on to the next unopened box. And work from there until there are no more boxes clogging up my office. (Will that actually happen??? Probably not in the next year or so). So, here are the books I've lined up so far. I may not end up doing the stretch goals because I DO also have e-ARCS to review and I try not to post more than 4 reviews a month. I also don't think I have the time to read more than that.

I'll be linking the books to their Goodreads page here first, and then updating the links to my review post once I've read them.

I'll probably update the list further on in the year if I decide that something else in the box/kindle fits better. Or if I cave and open another TBR box.

I decided not to do a full year in review because I am lazy, but I figured I might as well post my books in review.

Here are the previous years' posts (also so I can look them up lol; I should do a tag, shouldn't I?)

At any rate, here's my Goodreads' Year in Books, where I read 46 books during the year, not counting several I DNFed. And also several that I still haven't finished reading (anthologies, so I've stopped in between stories) which I probably should. hahaha. 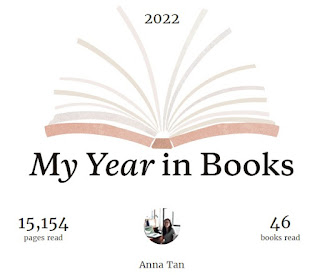 The first three were very automatic highlights because THEY ARE VERY AWESOME BOOKS, but the other two were chosen by going through my 5-star reads and going "huh yeah I remember that one very fondly".
But also, Brandon Sanderson and Diana Wynne Jones don't need any further boosts on this blog because they are a) super popular already (both) and b) dead (the latter).
Posted by Anna Tan at 9:30 am No comments:

That You're satisfied with me