Story note: Tulen (POV) is living as a servant in the Impian Palace under the name Sabit. Tengku Nawal has discovered that her father is trying to marry her off to Sultan Mikal and is trying to find a way to get out of it. Magda, her childhood nanny, has been out all morning and has just returned to the palace.

“Magda, oh Magda, you have to help me!” she says, almost prancing.

“What is it, sayang?” Magda guides her to sit at the table where I’m laying out the various dishes the kitchen has prepared.

“I’ve been thinking all morning, and Sabit has been a great help,” Magda’s eyebrows shoot up, “but she’s not you, Magda, she doesn’t know anything!”

“He listens to you. I just need to know what to say to him so that he won’t make me marry the Sultan!”

I have to bite my cheek to prevent myself from laughing at Magda’s incredulous expression.

“No, Magda, no buts! I’ve already thought about it all night and all morning and I’ve come to my conclusion. You cannot take Ayahanda’s side in this. He has no right to send me into a marriage I do not want!”

“I know!” she says, stamping her foot. “But it’s not the Sultan’s request, so it doesn’t matter. It’s Ayahanda’s request.”

She’s beginning to get annoyed, so I quickly push her attention towards the food. She looks down at the steaming hot rice and the freshly fried fish. She makes a face at the fried kangkung belacan but pulls the bowl of cabbage soup nearer.

“Sayang, your father only wants what’s best for you. This is why he is asking. You will have to get married eventually, and all he wants is to find the best husband for you. One who has the power and ability to take care of you and provide for you.”

“Eventually, Magda, but not yet.” She looks up sharply. “I’m still too young for this and Ayahanda knows that!”

“Many women get married at seventeen. This is just an engagement—you won’t have to marry him immediately.”

Tengku Nawal clicks her tongue in annoyance. “But I don’t want to get engaged! Not yet. I’m supposed to have time to enjoy myself and tour the Sultanate first!”

“Who says you cannot do that when you are engaged or after you are married? All you do is delay the inevitable, sayang. One day you will have to get married and leave home. It may not be to Sultan Mikal, but it will happen unless Kudus Himself wills it otherwise.”

The hand reaching for the fish stills.

Magda freezes where she sits.

A look of glee spreads over Tengku Nawal’s face. “Kudus. That’s the answer.”

“The answer?” Magda says, trying to recover her composure. “How?”

“A pilgrimage. I should seek the face of Kudus to find out if it is his will for me to marry Sultan Mikal. No matter what the Sultan’s reply is, he can’t stop me from doing that.” She starts stuffing her face with rice and fish, satisfied now that she’s found a solution.

Magda’s face darkens. “Do not take Kudus lightly, Tengku. A pilgrimage is not something you should embark on just on a whim.”

“But it’s the perfect excuse!” Tengku Nawal argues. “I will avail myself to the service of Kudus and by the time I return, whatever urgency Ayahanda has for this match will be over. Then we’ll see if he still wants me to marry the Sultan. Or if the Sultan even wants to marry me. I get to travel, and no silly engagement will be involved!”

“And what if Kudus answers you?” Magda grips the edge of the table. “What if Kudus Maha Esa decides to call you into His service? What will you do then?”

Tengku Nawal glares at Magda. I want to send her calming thoughts, but I don’t want to risk something that might change her behaviour too much—not while Magda is observing her so intently. Distracting her now is not going to work, anyway.

“What would Kudus want with me? Don’t be silly, Maggie. You know I don’t believe in your fairy tales. You may go now,” Tengku Nawal says curtly.

Jaw clenched, Magda gets up, gives the princess a deep curtsy, shoots me a warning look, then she backs out of the room. 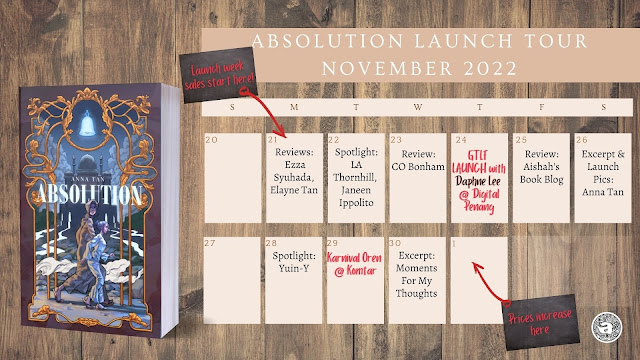 I was going to post the excerpts yesterday, but it got a little too long, what with the photos and the video. So you get the excerpt today!

Get the other books in the series at USD2.99 each as part of our Launch Week Sales!

We're currently working on getting the books printed, but you can pre-order a paperback directly from Teaspoon Publishing if you're based in Malaysia!

Living elsewhere? Ask for Absolution from your nearest independent bookstore!