Having been a fantasy reader for more years than any southern-bred lady should ever admit, I’ve encountered some excellent fantasy novels. Over the decades, I’ve watched many wonderful books rise to a height of popularity, enjoy the thrill of riding that wave of reader buzz, and then bob away to take their place on a shelf with others of like fame. With so many outstanding fantasies rising and ebbing across the years, it’s easy for newer readers to overlook some classics. Since I’ve been swimming this sea for a while, I thought I would share a few favorites you might’ve missed.
All of these novels have inspired my work in some important way.

Roger Zelazny’s Chronicles of Amber
“Amber is the one true realm, casting infinite shadows of itself.”  Only the royal family of Amber have the innate talent to navigate the shadow realms of Amber, of which Earth is one such shadow. At the beginning of Nine Princes in Amber, the first book in the series, Corwin wakes in a hospital with no memory of his identity. As he learns that he’s a prince of the royal family of Amber, so also is he pulled back into his brothers’ and sisters’ perpetual treacherous vies for their father’s abandoned throne.
Corwin moves from one near-catastrophe to another, each one often devised by a different family member, but his wit and his wry, cynical view make all of his misadventures—and indeed, this series as a whole—a joy to read.
The patterning described in my series is nothing like the pattern the royal family of Amber must walk in order to manipulate the shadow realms of Amber, yet Zelazny’s novels did provide a spark of inspiration for my own realm of Alorin, where “all things are formed of patterns.”

Anne McCaffrey’s The Rowan
The Rowan is a beautiful blending of science fiction and fantasy. The story follows The Rowan’s life from a traumatic disaster on a far colonized planet through her training as a telepathic and telekinetic adept with a powerful gift. Adepts such as The Rowan form the foundation of space travel in McCaffrey’s tale, which is part adventure, part coming of age, and part love-story. Ultimately, in trying to save her true love, The Rowan births a gift that may be the key to saving all of humanity.
The way McCaffrey described The Rowan made an indelible impression on me. The Rowan provided the early inspiration for the Healer Alyneri in my series.

C.S. Friedman’s Coldfire Trilogy
This is one of those series that never really loses that popularity wave. But in case you missed hearing about it the last time it crested, the Coldfire Trilogy, starting with Black Sun Rising, is a must.
Gerald Tarrant is one of the most memorable anti-heroes ever written. More admirable still when you realize Friedman wrote him long before Mark Lawrence made the villainous blackguard interesting. In Gerald Tarrant, Friedman presents a man of cold arrogance and bold evil—and makes you fall in love with him, hook, line and sinker.
The artful way she crafted Tarrant inspired me to explore virtue and vice in my own story’s cast of personalities. Some of my more alarmingly compelling characters have Gerald Tarrant as their distant grandsire.

Are you ready for the reveal of the new Cephrael’s Hand cover? Because here it is! 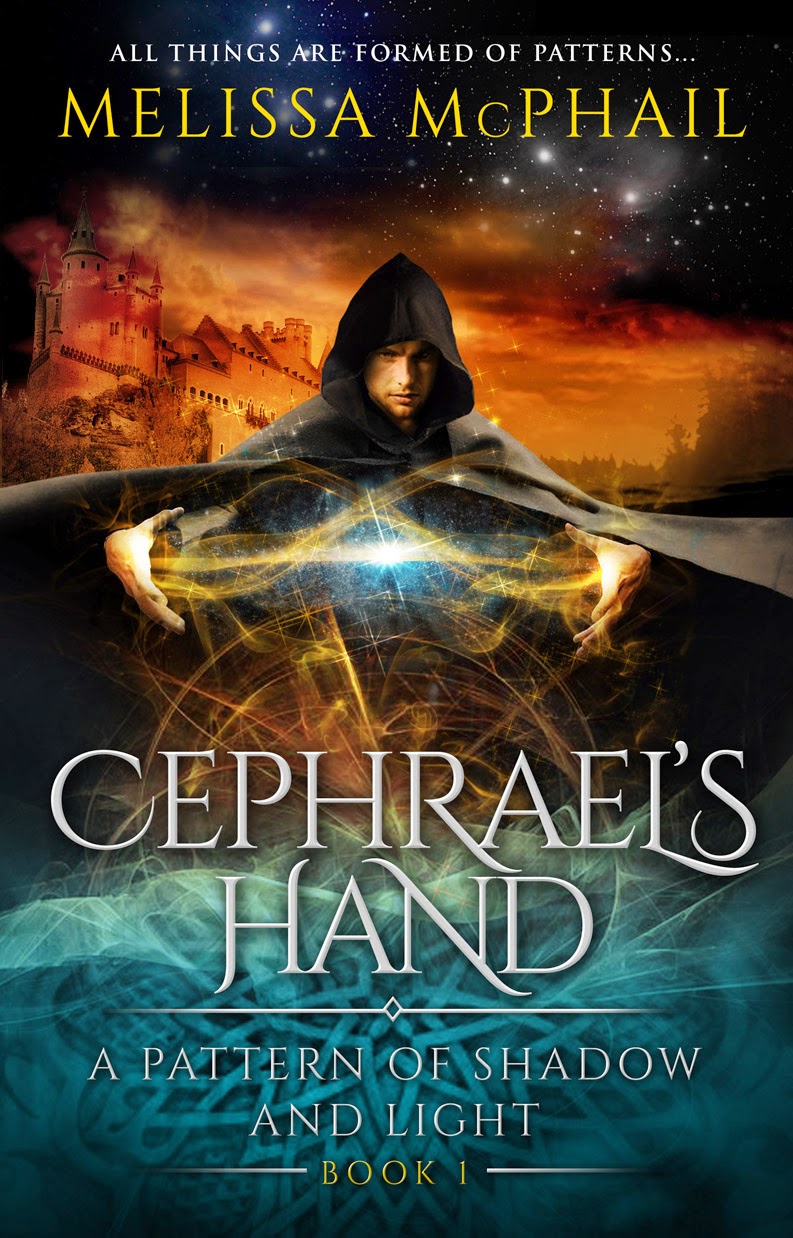 What do you think? Does it do a good job conveying the fantasy genre? Is it a book you’d be attracted to in the store? Does it make you want to learn more?
Thank you for helping us celebrate! If you’d like to see the new covers for books 2 and 3 in the series stop by www.MelissaMcPhail.com, and check them out.
Guess what else? The author is offering a special giveaway as part of this grand event. Check out the Rafflecopter form below (it’s also available at www.novelpublicity.com/cephrael-cover-reveal/) to find out how you can win a Kindle Fire. Hooray!
Oh, and don’t miss learning more about Cephrael’s Hand and where you can pick up a copy—that’s below too.

“All things are composed of patterns…” And within the pattern of the realm of Alorin, three strands must cross:
In Alorin… three hundred years after the genocidal Adept Wars, the realm is dying, and the blessed Adept race dies with it. One man holds the secret to reverting this decline: Bjorn van Gelderan, a dangerous and enigmatic man whose shocking betrayal three centuries past earned him a traitor’s brand. It is the Adept Vestal Raine D’Lacourte’s mission to learn what Bjorn knows in the hope of salvaging his race. But first he’ll have to find him.
In the kingdom of Dannym… the young Prince Ean val Lorian faces a tenuous future as the last living heir to the coveted Eagle Throne. When his blood-brother is slain during a failed assassination, Ean embarks on a desperate hunt for the man responsible. Yet his advisors have their own agendas, and his quest for vengeance leads him ever deeper into a sinuous plot masterminded by a mysterious and powerful man, the one they call First Lord.
In the Nadori desert…tormented by the missing pieces of his life, a soldier named Trell heads off to uncover the truth of his shadowed past. But when disaster places him in the debt of Wildlings sworn to the First Lord, Trell begins to suspect a deadlier, darker secret motivating them. Honor-bound to serve the First Lord in return for his life, Trell continues on his appointed path, yet each day unveils new and stranger secrets that eventually call into question everything he knows.
Get it on Amazon, Barnes & Noble, or wherever awesome eBooks are sold!

No, wait, what? I didn't cross post my review to my blog?
Okay, check out the review tomorrow!
Posted by Anna Tan at 5:00 pm