Dear multiple people who've asked how this conference was for me, I'm sorry for giving you awkward answers because I don't really process well verbally on the spot. Ask me in person now and maybe I can give you more than an "it was really good." (Or maybe not. Just read the blog.)

One of the things that came up over and over again throughout the course of the conference was the issue of identity. 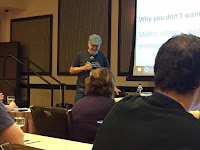 In David Farland's pre-conference workshop, he asked the question, "Who are you?" (What's your brand? Your territory? How do you define yourself as a writer?)

As part of the Q&A, he also mentioned Own Voices (all the rage, ha) and the need/demand for those authentic voices in the industry right now. (Cultural identity, gender identity, etc.) 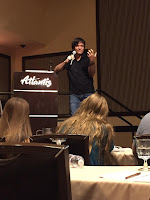 Ted Dekker's keynote focused a lot on perception: how our perception of life defines the story we tell ourselves, how our identity needs to be tied up in Christ instead of our writing, our career, our dreams, or our goals.

That identity is one of completion; of fulfilment--to see who you are in Christ is to remember that it is finished. There is no battle. Or as my notes say: Learn to awaken to the reality where you can sleep through the storm because, in your perception, there is no storm. (Ref: Jesus sleeping in the boat during the storm whilst the disciples are freaking out)

Our writing is part of our journey to discovering that in full: to discover who we are, who our Father is, and to bring others along so that they too may know Christ in his fullness. 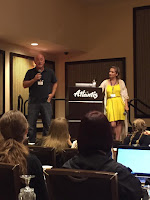 In the continuing session I attended (Heroes, Villians, & the Heart of Your Story), James L. Rubart and Mary Weber talked about how the theme (sermon) of our lives--the thing that is at our core--is really what's going to be the heart (heft) of our stories.

Repeated is the thought that the things that we struggle with, the perspective we hold, our journey of self-discovery, is what's going provide that heft and grounding to our stories.

Weber put it this way, "Your book will be as shallow as you allow it to be." If we don't work through our own issues, including where our identity is, we're just going to keep scratching the surface.

I think one of the reasons this resonates with me so much is because it's always been an ongoing struggle for me to fit in. And because of that, I don't really know how to define who I am except in negatives.


But this is not truth.

And I know it. In my head. Though not always necessarily in my heart.

As Dekker kept emphasising, Christ is all, and in all.
So that's where my identity should be. And although I'm not there yet, at least I know what I'm striving towards.

AMP:
11 - a renewal in which there is no [distinction between] Greek and Jew, circumcised and uncircumcised, [nor between nations whether] [c]barbarian or [d]Scythian, [nor in status whether] slave or free, but Christ is all, and in all [so believers are equal in Christ, without distinction].

Translation giggles: I would totally translate "orang asing" as "foreigners" and "orang biadab" as "rude people" - not exactly what barbarian or Scythian is supposed to mean?
Amplified puts the notes as such:

c - A derogatory term used to describe uneducated, uncultured people who were not fluent in the Greek language. [I guess foreigners works?]
d - The Scythians were savage equestrian herdsmen who were skilled archers and often worked as mercenaries and/or slave traders. The Scythian women were known to dress as warriors and fight alongside the men. [okay, so maybe biadap as in uncultured, not rude. But then again barbarian already means uncultured. lol]

Other note: the English translation puts it as "there is no distinction" which feels like it's already done. To me, the Malay phrase "Dengan demikian, lenyaplah perbezaan" gives the feel of "With that, we [need to] remove the difference/distinction"--There's an air of continuing and purposeful effort, as if we, the church, need to consciously remember and steadily work towards a world where there is no difference. Or actually, my brain is now saying "With that, the difference (perbezaan) disappears (lenyaplah)." Still, it has the tone of action, or at least being active.
Posted by Anna Tan at 9:30 am