Courage by Lauren H. Salisbury
My rating: 5 of 5 stars

What I signed up for: to help a fellow Realm Maker launch her second book with a blog tour. ('Cos I'm all about the blog tours!) And then I was told that to review book 2, I really should read book 1 as well, so here I am.
What I didn't know I signed up for: BABY MOSES IN SPACE.

So yes, Courage is a FANTASTIC science fiction retelling of Moses--well, the first part of his story anyway so far. Actually, if I hadn't known that going in, I wouldn't have suspected it until much, much later in the story. Salisbury takes her time to establish a credible planet of humans under Esarelian (aliens) rule. It's not an unfamiliar setting--forced labour under strict guard, an underground rebellion, a desperate bid to escape.

Gilla is a compelling protagonist--she's weak yet strong, pushing through her fears and devastating losses to make sure that her children are safe. Then there's Than, her brother, the dashing young playboy who has to grow up quickly and suddenly. Actually, to say that this is a Moses retelling is somewhat odd and wrong. It's actually a reimagining of what Moses's mother, Jochebed, went through to save him. We don't really know much about Jochebed in the Bible, only the bare bones of what happened and how the Egyptian princess came to find the baby in the Nile, so Salisbury has free reign to create her own story--and it's an exciting, action-packed one.

I'm glad I picked this up (on a chance) and am super looking forward to starting on Conviction!

Note: I received a digital copy of this book from the author. I was given the book with no expectation of a positive review and the review is my own. 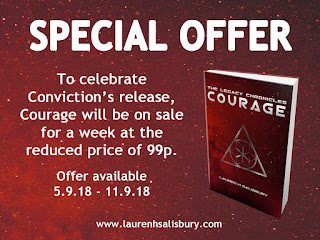 In conjunction with the launch of Conviction (book 2) on Friday, Courage is on sale at 99c/99p on Amazon and Amazon.co.uk for one week! Grab your copy now, and head over to preorder Conviction as well! (Amazon | Amazon.co.uk)
Posted by Anna Tan at 9:30 am