EVERYONE! IT'S AMOK'S COVER REVEAL DAY! 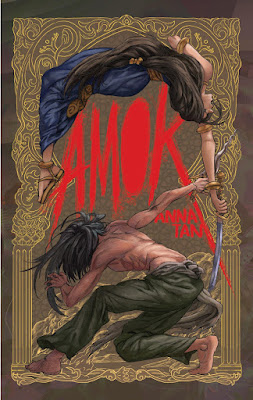 All Putera Mikal wants is to gain the Amok Strength, the supernatural power granted by Kudus to the Mahan royal family. No matter how religiously Mikal keeps his vows, Kudus still denies him the Strength—whilst his father, Sultan Simson, flaunts the Strength despite his blatant defiance of the Temple and the priests’ visions of coming doom.

Taken captive, Mikal must find a way to liberate his people and restore his throne in Maha—and the key to this is the Amok Strength. But what does it take to gain Kudus’ favour?

Amok releases in one month, on 24 June 2021, but you can preorder your copy now! 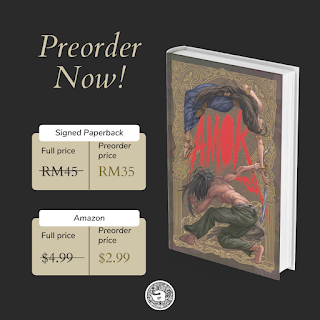 Love the cover? Check out our cover artist's website for more: Jiwosophy

Jiwo also explains his process in this thread:

@natzers approached me to illustrate and design the Cover for her "Absolution" Series, starting with the 1st of the trilogy, "Amok". Here's a thread documenting the creation process from beginning to completion.@teaspoonpub #CoverReveal #coverart #bookcover pic.twitter.com/SMdKxdUmYy

About the Author (aka me!) 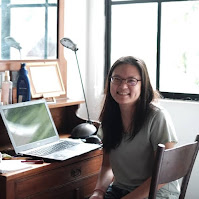 Anna Tan grew up in Malaysia, the country that is not Singapore. She is interested in Malay/Nusantara and Chinese legends and folklore in exploring the intersection of language, culture, and faith.


Anna has an MA in Creative Writing: The Novel under a Chevening scholarship and is the President of the Malaysian Writers Society. She can be found tweeting as @natzers and forgetting to update annatsp.com.

Find her online: Website | Instagram | Facebook | Twitter
***
Visit other stops on the Cover Reveal! Their posts will be going live throughout the day, so I'll update the links as and when I see them. But you can go ahead and see all their other bookish posts too :)
C.O. Bonham
Moments For My Thoughts
Sholee's Sphere
Mermaird | Mermaird on Instagram!
a Sith reader
Runalong The Shelves
H. L. Burke | burkesdragons
L.A. Thornhill
Kara J Lovett
Jason Joyner
Abigail Falanga
Posted by Anna Tan at 9:00 am