Have a great Christmas!

KL NOIR: RED by Amir Muhammad
My rating: 3 of 5 stars

I took a really long time to finish this one. Partly because I was busy, partly because... I don't know. Noir is maybe not my very favourite genre. I think I read this mainly because hey, it's local. Need to start reading local, right?
In terms of themes and language - let's just say these are mostly not for kids, ok? (Or the prudes like me.)

The stories I liked the most would probably be Rukun Tetangga by Preeta Samarasan and Mamak Murder Mystery by Marc de Faoite.

There's nothing inherently wrong with the writing in this... I guess it's just not my style.

View all my reviews
Posted by Anna Tan at 9:00 am No comments:

Some time last month, Hossein wrote me a nice message telling me about this new startup, Bookurve. 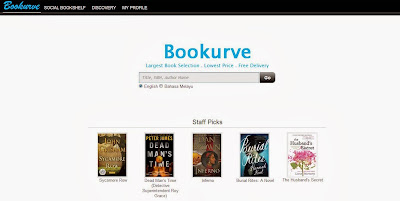 It's basically something like Book Depository, but focused specifically on the Malaysian market. As Hossein says [sic]:


"As comparing to Book Depository, we all have tried the service and sometimes the book takes more than 6 weeks to reach to Malaysia and we even encountered missing book. We know that the reader can order through bookstore as well and again the service is not so good. We are just trying to give a better service while keeping the price as low as possible."


What this means is - you search for the book you want, and then you order and pay for it and it gets delivered to your house for free. Yay!

It's another one of those sites that link to your facebook account (everything's social nowadays, isn't it?) so you can check what your friends or other Malaysians are recommending, and you can add the stuff you're reading or the stuff you've bought to the social bookshelf as well. It's currently English and Malay books at the moment, but I'm told they're planning to expand to Chinese books as well.

Discovery lets you browse the bestsellers or featured books, selected by categories and language. I was looking for the search feature under discovery, but realised that the search function is on the home page. Duh.

So anyway, I randomly clicked on Ender's Game and this is what pops out:

And if shipping's only 1 - 3 business days, that's pretty fast!

I'd wanted to write about this a little last night too, but it was late and it slipped my mind by the time I got round to actually writing the review.
It was just a thought about tragedies and the role they play as catalysts in theatre. The thing is, having some sort of family tragedy is so overdone in Christian plays. It's utterly predictable.
You have the headstrong person heading to hell and nothing you try to say can change them but then someone dies or nearly dies and all of a sudden they (or the loved one, depending) repent and see the error of their ways and turn to Christ.
Marrying Me almost had that cliche - except that they faked it. They created a fake crisis to try to make Stephanie get married. I liked the twist and the fact that they made us know it was fake, because if they didn't that would have made it such a boring generic show.
Which comes to the question - will a tragedy of that sort really change someone? Or would it just be a temporary thing until that loved one really dies?
Posted by Anna Tan at 11:49 am 1 comment:

MUST I get married? #marryingmemusical #review


When you reach a certain age (normally after 25) the few questions you tend to hear a lot are:
It's a presumed fact of life that you are supposed to get married. That's been the formula for the past hundreds of years, and it's supposed to be the formula for the next few hundred, never mind the fact that half the marriages now are ending up in divorce. As Auntie Gertrude (Chang Fang Chyi) says, "Everyone gets married for the wrong reasons."

Marrying Me is a hilarious look at what happens when Stephanie's mother and aunt get together and start planning to make her tie the knot. Stephanie (played by Stephanie Van Driesen), the headstrong CEO of SCOWL, an NGO to help abused women, absolutely refuses to get married... until her mother (Sandra Sodhy) mysteriously falls ill and says it's her dying wish to see her married. Who else can she turn to but her old flame, Tony (Tony Leo), who also just so happens to be Auntie Gertrude's son?

Stage 2 is a really small space, so it's easy to see everything that's going on (no faking due to distance, ha) - the cast of Marrying Me was gave a really stellar performance. This is the first time I've seen Stephanie Van Driesen act (I've heard her sing in the YES Academy 2012 show), and I thought she was superb as this very strong, intensely wacky, and yet immensely vulnerable woman. It was also great to see someone I've worked with before - Benjamin Lin - playing Stephanie's BFF, Leroy (was also totally distracted by the 'legalize gay' shirt!).

What I like best about this musical is how local it is. It's stuff that you instantly relate to like parents pushing you to get married, broken families, the tough relationships that sometimes happen, and the crazy mismatch of religions that we sometimes practice (a Catholic family that believes in palm reading?). Of course, never forget the witty asides on current affairs!

It's really a must-watch show.

P/S- Oh - if you're watching it in Penang, do check where you sit! It makes a bit of a difference, because it's theater-in-the-round so the "front" stage gets more face time, though usually they do face all corners. (And I happened to be in the corner Benjamin was facing... hahahaha!)