In preparation to write my year in review post, I went back through my archives and realised that I've actually been doing this for a long time.

Starting with the blog, simple maths says that this blog has garnered 48.6K views this year, which really goes to show that last year was an anomaly. And because I have apparently rediscovered my love for analysing figures and making graphs, here's a graph which shows you 2015 was weird: 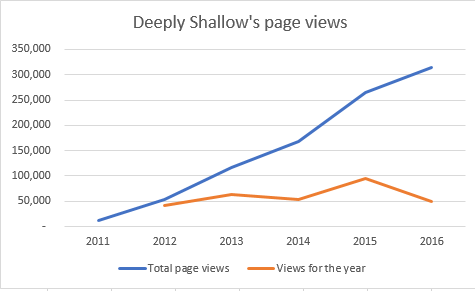 Other than the A-to-Z blogging challenge (which I started doing in 2011!), this year's blog has primarily consisted of 3 types of posts:
I have to admit, I mainly slacked with the flash posts because... well... lazy. And busy. And writing other things. But since the book reviews have been mostly consistent until December, here's a round up of my favourite books for the year! 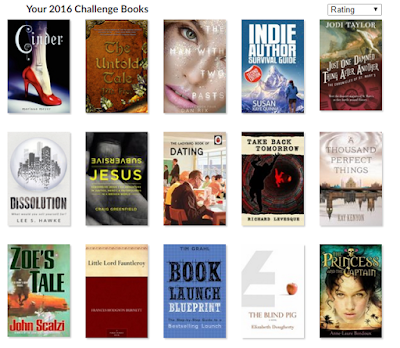 Well, there were actually 16 5-star books, but the last one couldn't fit in my screenshot :P
I don't actually know how Goodreads arranges these but here they are in alphabetical order on Amazon (affiliate links):

A Thousand Perfect Things (Kay Kenyon)
Beguilement [The Sharing Knife] (Lois-McMaster Bujold)
Book Launch Blueprint (Tim Grahl)
Cinder (Marissa Meyer)
Dissolution (Lee S. Hawke)
Indie Author Survival Guide (Susan Kaye Quinn) - there might be a 3rd edition out but I can't seem to find it
Just One Damned Thing After Another (Jodi Taylor)
Little Lord Fauntleroy (Frances Hodgson Burnett) - such a classic
Subversive Jesus (Craig Greenfield)
Take Back Tomorrow (Richard Levesque)
The Blind Pig (Elizabeth Dougherty)
The Ladybird Book of Dating (Ladybirds for grownups) - okay, this was a bit of a joke, but it's HILARIOUS
The Man with Two Pasts (Dan Rix) - this is the last book in a series, FYI. But it's a good series!
The Princess and the Captain (Anne-Laure Bondoux)
The Untold Tale (JM Frey) - OWAITOWAITBOOK2JUSTRELEASED
Zoe's Tale (John Scalzi) - this is book 4 in a series, but I read it without reading any other book of the series!

To read all my flash fiction for the year, follow this tag.

I released Coexist on 31 March 2016 with a semi-successful blog tour. (Okay, I don't know how successful it was, but I think it was successful? But maybe not, because several months later a friend says oh, I didn't know you launched.) At any rate, I have just approved a quotation to do a print run in Malaysia, so that should be out sometime... I don't know. January? Hopefully.

I wrote and released Anna's A to Z of Worship Leading, which was written for the A to Z blogging challenge, in May 2016.

Working with the Malaysian Writers Society (MYWriters) in Penang, we launched the first volume of NutMag, an annual zine which features writings from Penang! I had the privilege of editing this volume, and one of my flash fiction pieces is also included in the list of 10 authors.

I also sold a short story to Insignia Stories, but I'm not quite sure when that's going to be released. I was hoping it would round out the end of the year.

Lastly, Love in Penang (which I edited) is #58 on Fixi's all-time bestseller list, with something like 6.5K sales total (according to the publisher), whilst Cyberpunk: Malaysia (which includes a short story of mine) is at #82.

On to unpublished stuff, Flame of the North is also mostly done, just waiting for a cover and the editor. Dongeng is on its first draft and Absolution is kind of in the pits. But I'll get back to that in 2017.

I also submitted to a bunch of places this year and whilst half of them were rejections, one was an acceptance (Insignia, as above) and the rest are probably rotting electronically in the slush pile, I'm kind of happy with the volume of work I've produced. Even with the other whole bunch of non-starters and half-abandoned ideas. I really should start tracking my word count.

Community-wise, the Malaysian Writers Society is A THING, like a real legit registered society, okay. And while we're still working out the kinks and trying to set things up right, it's still awesome cos it's happening, if you know what I mean.

You can apply for membership here.

We pulled off registrations and a fest in Sept & Oct, leaving a lot of people very frazzled. I also got to lead a workshop on Self-Publishing! Woohoo!

In Penang, our events are moving at full force with weekly write-ins on Mondays at LUMA, a monthly write-in on the weekends (Sat/Sun - we swapped quite a bit this year) and not-quite monthly readings on the 3rd Thursday of the month. Not-quite monthly because we have a quarterly special which is often just a catchup/makan session. Oh! We also instituted the monthly critique as part of the Monday write-ins, which sometimes works but sometimes not. Oh well.

And, of course, the MOST EXCITING PART: our drop-in writing space at LUMA during the last week of November was an absolute BLAST.

I also went back to acting for a short while, doing W;T with the Penang Players.

I also turned down a chance to act with them in 2017 because I didn't like the script. But maybe I'll go for another audition in Feb. I don't know. I DON'T KNOWWWWWW. I might be in a cave by February trying to align timelines and stuff, so, yeah.

We (I) also tried to kick-start (again) a drama team in church, but whilst we did do one show during Occupy Beach Street and in church followed by a Treasure Hunt for Christmas Eve, I don't know how or if it's going to work out. Right now, I'm thinking it's a non-starter.

I also joined a choir.

I don't really know what else to add here. I think I've covered the main stuff: blog, writing, acting... I updated my website (again) and created another website and if you think it's pretty, it's only because of the wonders of drag-and-drop templates. And canva.com, which makes life simpler.
And this post is getting too long.