#fridayflash: Beneath the Rumbling Earth excerpt... and a Cover Reveal!

Mica had always loved the Painted Hall. In the dark, cold year he spent in the castle, when everyone assumed he was the heir, the Painted Hall had been his only solace. It was the only place in the North where he could be with the sea and the creatures he loved, even if they were not real; even if they were just two-dimensional drawings on a cold wall, he was with them. In spirit. When his grandfather's spirit had been released and the Yuki-Onna disappeared, Mica feared the enchantment would wipe away all evidence of the sea from the Castle of Winter. He was glad it hadn’t.

Now, with Hono’s strange words lingering in his thoughts, he entered the hall cautiously. It was as he left it eleven months ago. There was the Kraken in the deep, tentacles outstretched. The whale swum ponderously at eye-level, dark and heavy. The deserted ship still rocked in the storm. In his father’s time, there had been people—his mother’s unlucky suitors—but they’d disappeared from the walls when the curse broke. He hoped they’d been returned to their lives and to their families, but no one knew for sure. Far above, the dolphins leapt, half out of the water, as if aiming for the sun. Mica’s hand hovered over the mural.

Mica snatched his hand away. “Who is speaking?”

“Us. The monsters on your wall.”

Mica stared at the great whale before him, for no reason other than it was the easiest to look at. “Who said you are monsters?”

“Does not this realm consider us monsters from the deep?”

“This realm, maybe, but not mine. You are my friends.” He paused. “You have not spoken to me before. Who gave you the power of speech?”

A chuckle filled the air. “Did you not know that this castle is enchanted?”

Who? Mica gulped. “Hono, Flame of the North.”

“Hah. She is too young. She has not grown into her powers.”

“The former prince is old and weak. His powers wane.”

“My mother will fight you.”

“Ah, Hana, Blossom of the Snow, the Ever Young. She has no more power here. The crown has passed from her hands.”

“Danis of the Sun and Sea has never ruled over us. He conquered the Yuki-Onna and broke her curse, yes. But he was not our enemy.”

Mica stared the whale in the eye. “What do you want of me?”

“Nothing. Nothing but our freedom.”

“Come to us, son of the Sun and Snow. Fall into our embrace. Dive deep. You’ve heard your father’s stories, have you not? About how the paintings in this hall came alive for him?”

“We give you the chance now to do the same. Come and join us. Dive into the deep waters you crave...”

I'm figuring out a new way to publish my stories now that Pronoun is going away. While I do that, here's the cover for Beneath the Rumbling Earth! 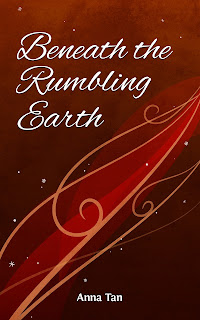 It's the third in the North Series and will be online sometime this month! Promise!
Posted by Anna Tan at 12:03 pm