Skyward by Brandon Sanderson
My rating: 5 of 5 stars

This is a brilliant, brilliant book, and the long reading time recorded is only because Worldcon came in between the first half and the second half of my reading!

Skyward was entrancing from beginning to end, driven by the sheer focus and desperation of Spensa (Callsign: Spin). She grates on you a little at times, but if you can see past the bluster, you feel how she hides her vulnerability and fear in the most outrageous fighting words she can utter--all in an effort to hide from what her father is said to be: a coward. Spensa is the only one who knows this cannot be true. Admiral Ironsides and the First Citizens must be hiding something. Whatever the truth is, Spensa is not going to let it stand in the way of the thing she wants the most: to be a pilot, fight the Krell, and see the stars.

There are shades of Ender's Game in this, where children are used in battle against the invading aliens, in a sheer war for survival. It's really the plot twist that makes this book, something I did not--and could not--have foreseen. It's a truth Spensa doesn't want to hear, but which propels her--and the book--into greater heights.

Sanderson writes a brilliantly, and I may actually like this one more than The Stormlight Archives, which sometimes drags out just a tad too much. This is perfect for what it is, an exciting adventure in the skies.

I received a complimentary copy of this book from Gollancz via Netgalley. Opinions expressed in this review are completely my own.

I picked up a free preview (the first chapter) of Starsight at Worldcon! SO EXCITED. 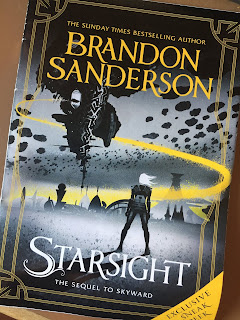 Get Skyward and preorder Starsight!
Posted by Anna Tan at 4:30 pm