#CoverReveal and #Preorder links: The Tale of the Hostage Prince

After all the organisation I did for the release of Amok - which went astray anyway because of Malaysia's MCO - I feel like I don't have any concrete plans for launching The Tale of the Hostage Prince, other than my A to Z posts.
Mostly because I'm just sitting on everything being overwhelmed. And also slightly over-scheduling myself for March when I knew I was trying to launch a book. (Or maybe because I was launching a book?)
BUT!
Launch day is now less than a month away, final files are at the printer or uploaded online, and I'm staring at April wondering if I've made a bad choice...
So I guess it's time to reveal our lovely cover, designed by Jiwosophy!
~ 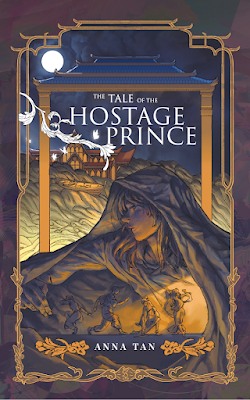 Yosua wears an uneasy crown. Although he is now Raja of Bayangan, he still longs for the land of his birth where everything was much simpler…and less deadly.
But peace doesn’t come easily, not for a twenty-year-old servant playacting at being king.
With his parents brutally murdered and his uncle bent on revenge, Yosua must decide where his loyalties truly lie. With his only remaining relative and the kingdom he has claimed? Or with his best friend Mikal and the sultanate that raised him as a hostage?
~

ebook | paperback (Malaysia)
I've dropped pre-order prices to $2.99/RM12 for ebooks and RM35 for paperbacks in Malaysia. The international release for paperbacks is in the process - it has to go through some final checks before I can release it for sale.
~

who don't mind subscribing to my slightly-neglected newsletter:
I'm trying out Smashwords' presale function, which means that you can get early access to the ebook like NOW! Before release day! If you click to subscribe to my newsletter, you'll even be able to get it at the pre-order discount of $2.99! (If not, you can still get it at the full price of $4.99.)
HEAD TO THE SPECIAL PRESALE
Posted by Anna Tan at 5:40 pm