I guess FB ads do work.

Ch'ng saw an ad on Facebook yesterday and so we ended up catching the first night of the Ignite Solo Performance Festival Week 1 at iBOX Theatre. Two performances, A Complete Woman and Kenapa Tak Tukar Nama, form Week 1's offering. Week 2 will be at Jetty 35, featuring Hujan Pagi and 11:11 A Tribute to Loving (V3). 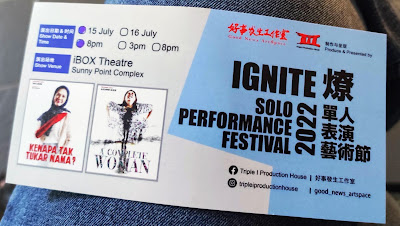 1) Where on earth is this theatre, why is the address in some office complex?

2) Got subtitles or not?

iBOX theatre is on the second floor of Sunny Point Complex and was relatively easy to find because a) they had the poster above right by the lift telling you where to go, and b) you can actually see the theatre itself on your right the moment the lift doors open. It's pretty small, black box style, and fits about 50 pax. (We counted 6 rows of 7 chairs in the main seating area, there were a few more chairs in front of the sound desk. They could probably add more in a pinch, but I don't know if there are still any SOP limitations.) 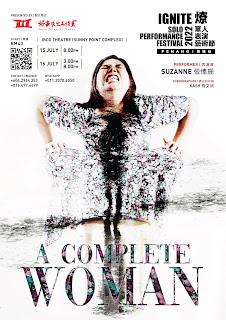 This monologue, written and acted by Suzanne (directed by Chee Sek Thim), explores the lifecycle of a woman from marriage and pregnancy to the birth of a daughter, coming full circle to the woman writing a letter to her eighteen-year-old daughter who is about to get married.

It's a very heavy monologue, though it starts off somewhat light, talking about the blessings of getting married and being pregnant, and how everyone is happy for you. It also explores the different taboos and practices around pregnancy - and this was just between two different Chinese dialect groups (in this case Cantonese vs Teochew), proving that there really is no Chinese monoculture, even in Malaysia. Some of these points - including the part where she was stuck in GH and couldn't understand the nurses speaking in Malay - could have been funny, but presented as it was (by a woman who seemed to feel trapped in her marriage), it felt more like a panicked cry for help.

Where it turns dark is when she talks about not being prepared - how the child was an accident in a moment of passion and how she desperately wanted an abortion because she was not ready for marriage and children. There's also a reference to her mother staying in an abusive marriage because that is her home and she will not let it go. It felt like a distorted point of pride for her at being able to "keep the family together", implying that the current rate of divorces show that these modern women are not tough or dignified enough to hold their marriages together.

At the end of it all, the daughter (and the audience) is burdened by the question: are you ready? Are you ready for the way that marriage will change you? Do you realise that getting married is not just being in love, but also having to adapt to and change for the family you are marrying into? Is your identity strong enough for that? Can you hold on to yourself through the pressures your in-laws will put you through, and emerge the other side still complete and whole? Does marriage make you complete or are you already complete before marriage?

This was the one I worried about because it's... Chinese theatre and I am a banana hahaha. A Complete Woman was mostly in Mandarin, with some Cantonese, Teochew, and Malay. There were English subtitles, but these were not very well done - ignoring grammatical mistakes, there were parts where the translation didn't quite make sense. In fact, there was this whole section that either wasn't translated or the projector got stuck, because the words didn't change.

Performance-wise, it was a good show, though I probably didn't get the full experience, being distracted by reading and figuring out the subtitles. But as I said, it was also very heavy-hitting, ramping up pretty quick and staying there for quite a while, so you get an overwhelming hit of raw desperation and not many other emotions. Maybe if you could understand the actual dialogue it would hit you differently. 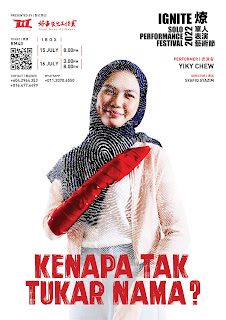 Hoe Mei Ying wants to get married to her boyfriend Zahari - and they've already gotten tickets for their honeymoon at 70% off during the Matta fair! The only problem is that she needs her new IC after her conversion to Islam, but JPN is delaying the process because she refuses to change her name.

Yiky Chew's performance was brilliant. As a solo performer, she switches between different roles seamlessly, but also leaving the audience with no doubt as to which character she is playing at any point. I especially loved her portrayal of Puan Fatimah, the woman at JPN who interviews Mei Ying to try to convince her to change her name to a Malay one even though it's not required by law.

Despite the hilarity of the situation and the way Chew played it up for laughs, it is also a very poignant piece. Zahari points out that no matter what happens, no matter her name, it's still just the two of them, in love. Mei Ying's parents panic (What? When did he propose?) and point out all the difficulties she might face, from being unable to eat pork anymore to whether her body might be snatched by the authorities in case of death. Mei Ying describes the goosebumps she had during the conversion ceremony and how surreal it felt.

But Mei Ying's declaration of why she wants to keep her birth name is the one that resonates the most: the connection to her forefathers and the generations before her by the surname she bears, the love with which her grandparents had picked out her given name even if it is a very common name. And while she may change her religion and marry into another culture, these connections with her past, her race and ethnicity itself do not change. So why should she change her name? Why must she meMelayukan herself? (Muka masih Cina lol)

Kenapa Tak Tukar Nama? is primarily in English & Malay, though the section with Mei Ying's parents had some Chinese. There were subtitles throughout in both English & Chinese. I only looked at them at the points where they were speaking Chinese, so I have no major thoughts about them.

Both plays worked well together thematically, with their emphasis on marriage and its impact on a woman - whether through cultural norms or the inner workings of bureaucracy. One thing that stood out was the fact that both these pieces were biographical - it's not fiction or conjecture, not a simple "what if". A Complete Woman was written from Suzanne's own experiences; Kenapa Tak Tukar Nama? was developed by Chew and Syafiq Syazim (the director) based on the experiences of a friend as told to them by that friend and their family members.

There was a Q&A session after the two plays, which is not something I've ever seen done in English theatre. I don't know if it's a common thing in Chinese theatre?

If you have no plans for today, do catch their performances at 3pm and 8pm. It's worth the RM40!

Pretty sure you should be able to walk in because the theatre was less than half full on Friday. Though if you want to check and reserve tickets, you can contact them at: