Welcome to another Novel Publicity tour! We're so excited for the release of The Jakkattu Vector by P.K. Tyler that we wanted to celebrate with a great giveaway featuring a Kindle Fire, one of a kind Jakkattu Vector bookmark and a special book bundle from the author herself!

The Jakkattu Vector by P.K. Tyler
My rating: 4 of 5 stars

Sabaal is a captive Jakkattu imprisoned on Earth by the Mezna priests who experiment on her. Javan 6ix is a tek - half Miscegenate, half machine - beginning to question his life in the city. Norwood Thorne is too smart for a human, too inquisitive for a man, leading his sister Julip down the path of questioning the Temple, the Mezna and all the history they've learnt on the Rez.

Sabaal's escape is the part of the catalyst that throws them all together, leading them to question whether everything the Mezna has been telling them is true. Because beyond their fences, the Feral - the Undone as they name themselves - have information that will turn their understanding of the world upside down.

The Jakkattu Vector is action-packed, with Tyler propelling you from one scene to another, giving you glimpses of the truth, glimmers of the lies these human-Mezna hybrids have grown up with, expecting you to piece them all together before the horrifying reveal. In between, she engages your emotions with the innocence of the young Thornes as they grow up, navigating the thin line between independence and insolence in their quest for truth. And then she feeds you heartbreak on a platter.

The Jakkattu Vector is gritty and grim yet inexplicably hopeful as each of strand of humanity - human, Miscegenate, Undone - come to terms with who they are and what the Mezna has done to them.

Note: I received an ARC from Novel Publicity in exchange for an honest review as part of a blog tour.

They came as saviors to a deteriorating Earth

Julip Thorne questions whether there is more to life beyond the barren dirt, acidic seas, and toxstorms her people work and die in. Living in poverty on the withering Greenland Human Reservation, she wonders if the alien Mezna goddesses are truly as holy as the temple preaches. Julip begins to dig deeper into the history of the planet and her leaders’ rise to power. But nothing can prepare her for the atrocities she uncovers.

Meanwhile, Jakkattu prisoner Sabaal suffers constant torture and heinous medical experiments as her Mezna-priest captors seek to unlock the key to her genetic makeup. Escaping from captivity, she finds herself suddenly alone on the hostile alien planet of Earth. To survive, she’s forced to work with the same Mezna-human hybrids she’s loathed her entire life, but the more they work together, the more they realize that their enemy is the same.

When humans and Mezna collide, will Sabaal turn out to be the genetic vector the Mezna have been searching for all along, or will she spark the flame that sets a revolution ablaze? 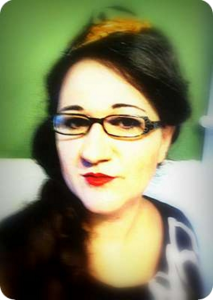 P.K. Tyler is the author of Speculative Fiction and other Genre Bending novels. She’s also published works as Pavarti K. Tyler and had projects appear on the USA TODAY Bestseller’s List.

“Tyler is essentially the indie scene’s Margaret Atwood; she incorporates sci-fi elements into her novels, which deal with topics such as spirituality, gender, sexuality and power dynamics.” – IndieReader

Pav attended Smith College and graduated with a degree in Theatre. She lived in New York, where she worked as a Dramaturge, Assistant Director and Production Manager on productions both on and off-Broadway. Later, Pavarti went to work in the finance industry for several international law firms. Now located in Baltimore Maryland, she lives with her husband, two daughters and two terrible dogs. When not penning science fiction books and other speculative fiction novels, she twists her mind by writing horror and erotica.

a Rafflecopter giveaway
Posted by Anna Tan at 9:30 am