#guestpost: Why the busiest times are the best times to write by @akooman

If you’re like me, you have to pretty much hire private security to keep yourself from watching reality television, because if you start you can’t stop. Not the self-absorbed-celebrity-does nothing-significant-and-films-themselves-arguing type of reality TV. I mean the shows where creative people have a deadline to make something, with an interesting challenge thrown in for kicks.

Like: Use this ball of string, four rags from a mechanic's shop, and a push-up bra to design a glamorous outfit that an A-list star will wear to the Met Gala. You have three hours.

Or: Here’s a box of locally grown produce (turnips), a can of Spam circa the Vietnam War, and four jelly-filled doughnuts. Make an appetizer that will persuade a Michelin-star chef to hire you as the sous-chef at her new Vegas restaurant. You have twenty-five minutes.

Put a bunch of success-hungry creative people in a room together and give them a timed challenge with limited resources and I’m a fan, no matter if it’s fashion, furniture or fine dining.

It’s amazing to see what people can come up with on a forced timeline. It’s cathartic to see how they handle the pressure cooker of agreed-too but extreme limitations, especially when there’s some prize money and career breakthrough on the line.

If you’re indie anything—musician, writer, artist—you probably know just how mesmerizing it can be to watch such creative feats unfold.

As ridiculous as it may first sound, I think there’s something to be gleaned—besides entertainment and the occasional inspiration—from these creative Guinea pigs: a sobering kind of motivation.

In fact, my busiest times are the best times to write. Now, you might scoff at this premise coming from me, since I’m about to release Book Two in my YA series nine years after releasing Book One. But hear me out, because I stand by my claim.

One of the most productive exercises I have incorporated into my own writing practice and that I use when I lead other writers in workshops is to “force” writing for short moments, with a single rule: write for an entire minute, no matter what.

For some, especially writers with writers’ block, this can feel like cruel and unusual punishment akin to water boarding, but it’s actually a kindness. Once the parameters are clearly established and the stopwatch starts, one minute typically turns into two, then three, even five or more and the resistant writer can’t stop writing.

Boundaries, deadlines, limitations are a kind of grace for any writer.

That’s not to say one can command the best content at any time, simply by summoning a stopwatch and a pad of paper with a pen. Because certain stories must be ready to tell.

That’s the flip-side of the coin that is my own writing practice. I thrive within clear deadlines, but the story I need to tell must also be ready to be told. And there’s mystery to that process for me.

So, I can’t say with one hundred percent certainty why I waited almost a decade to write Book Two. Life got busy (with multiple stage plays, tours, a film, world travel, family, grad school, and a hundred other things) so the project got pushed back. But it also wasn’t ready.

I wrote other things in the meantime and when it was, I set a timeframe. And, on available days I had to write, I sat down to craft the story. Sometimes the writing flowed outside of the set time; sometimes it stopped short.

Then I’d schedule another deadline until the book was complete. Despite “everything else” in my life both professionally and personally, I’ll do the same for Book Three.

For some reason, the busiest times are the best times to write because I’m forced to ensure I carve out time for the thing I love, that refuels me, that I need to do, in the midst of all that’s going on (even when the busy thing is a writing project itself. Because—as an aside—even in the midst of a project, there’s always another story I want to tell and pick away at and find time to simply outline because it’s another opportunity and a kind of reprieve or breath of fresh air from the hard work that the current project requires).

So, my fellow creative, let “busy” fuel your practice. What mesmerizing feats will it force out of you? 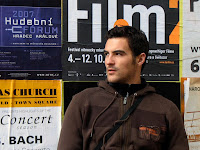 Andrew Kooman is an award-winning writer and producer with a Master of Arts degree in English from Western University. His critically acclaimed work has been produced around the world and translated into more than 10 languages. A co-owner of the production company Unveil Studios, Andrew writers for the page stage and screen. His new novel Ten Silver Coins: The Battle for Acchora is available November 29, 2018 and is the second book in his YA series.

Get a copy of Ten Silver Coins: The Battle for Achhora

Print Book - As of November 29:
amazon.com (and all regional territories)
IndieBound.org