Of Endings and Goodbyes

There’s always a sense of leaving.

Today I sit on the 607 to White City, to what may be my last Ealing write-in. I usually read on the bus, but today I watch the scenery and feel a sense of... nostalgia? A sense of saying goodbye? It doesn't make sense. It’s only been a year.

But there is a sadness in saying goodbye. I’m maudlin. I don’t leave the UK until mid-December but I am moving away from this neighbourhood in West London down to the south.

I’m not. I have an essay to hand in that I’m procrastinating on because of this finality.

These are neighbourhoods I’ve never explored, but have always thought one day, one day I’ll get off this bus at a random spot in between and I’ll see what you have to offer.

I never have. Now I never will. They’re just shops. A suburb. I don’t do this back home. Maybe I should. 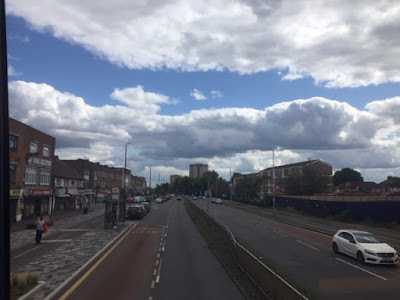 I take photos. It’s a beautiful day. I want to remember this place. It has been good to me.

You have been good to me.

I don’t write at the write-in today. I read and reread my essay, tweaking it to sound a little bit more academic, a little less like an irreverent Terry Pratchett-esque commentary. Deleting my snarky footnotes does the trick.

The discussion revolves around reasons to punch a priest and the differences between the Catholic Church and the Church of England. We should read more Austen to figure out what a parish is, one says.

I order the cream tea, telling myself it’s not the last cream tea I’ll have in England. I have another three months, more than enough time for tea and scones. I finish editing the essay, leaving only the references to be formatted. I have been putting off formatting the references for half a week now. What's another few hours?

I am restless. I'm always restless.

I leave early, at half-past four, to make it in time for church.

Church is a series of telling people that I'm done, I'm almost done, I'm leaving soon. I have plans, I don't know what my plans are, I'm working on plans. I hope to tour Europe before I go, I don't know if I will see you again.

It's a rash of goodbyes, some I take care to tell that it may be my last service, it will be my last evening service. Next week, my halls will kick me out at ten in the morning, so I'll have to wake up for the morning service. We have a life group BBQ after that, and then I'll be gone.

I walk home in the gathering dark. It's getting dark earlier, there's a chill in the air. I've gone from complaining about the stifling heat to thinking I should close one of my windows. It's not that cold yet, 3/4 of my windows stay open. I don't use my scarf, though I brought it out.

I fix my references.

There's always a sense of leaving; all things come to an end.

You make all things new.