I am sitting here writing an actual blog post that is not a #musicmonday post or book review, which is both weird and awkward because:
a) I haven't done one of these in a while, and
b) I have a lot of other things I should be doing but am not doing because I am not in the mood for it. 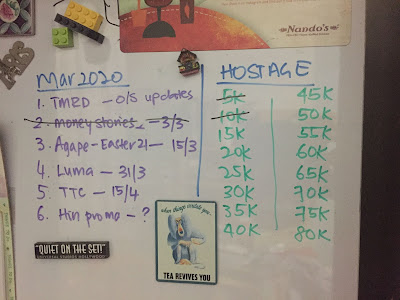 This seems to be a recurring theme these days. I'm supposed to be getting back into the swing of things (or "hitting the ground running", ha! a dream I often delude myself that I am able to do) but it seems that I swing from the extremes of being too busy to stop (because I have been procrastinating too much) or stopping for too long (because oh look, there's nothing *urgent* I need to finish right now).

The second part is a lie. My Microsoft To Do list (segued over from Wunderlist) tells me I have 36 things planned, 7 of which are overdue and 5 of which are due in a week. Some of these have been there since December, and I've just been rolling forward the deadline until I gave up and left the red DUE DATE there to make me feel horrible. Not that I feel horrible. I just feel... lost? Anxious? Confused? And I'm drinking copious amounts of tea because making tea makes me sit at the table, thereby increasing the chances of Getting Things Done by at least 50%, if not more.

I console myself that I am, at the very least, doing well at completing paid jobs on time but if I know anything about business, that's not going to be great in the long run because I'm not actually doing anything to give myself more business. (Hire me! lol)

But on the writing front, because I've been telling my critique group that I'm going to start writing the new story since January, I did actually get round to starting the new story and hit 10K a couple of days ago. Which I'd initially targetted to hit a month ago. I don't know if I'll catch up to my original timeline (that aimed for a first draft by the end of March) but I guess I can make whatever's left over for CampNano in April. Well, at least I've started so there's that.

I have a book review that's overdue--I missed this Wednesday's post--so I suppose I should get round to doing that now. Since I don't feel like doing anything else tonight.
Posted by Anna Tan at 10:53 pm