#nanowrimo: An excerpt from the #teanovel! 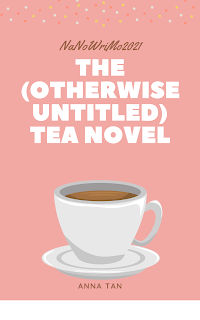 It was a Saturday and Jasmine didn’t know what to do with herself. The routine had always been to be doing things during the weekday, whether that was school or college or work, and then to be not doing things during the weekend, which in school or college had meant either meeting up with friends or joining some church-related activity, but in the past fourteen years had gradually come to mean stumbling into the office at 11am “for five minutes to grab a thing or send an email” and then going home at midnight anyway. She was good at “not doing things” in that context, not so good at what most other people called “not doing things”.

It didn’t help that after almost a decade of that kind of behaviour (the first five years were a mix; she’d managed to hold out for that long until her seniority and job scope meant she couldn’t just deny her way out of responsibilities) she didn’t really have any friends outside of work. Outside of her old job, she should say. Were they even friends? Or just people she had to deal with on a regular basis?

What even were friends?

Jasmine lay in bed staring up at the ceiling, wondering what she should do. She pulled her blanket over her head and inhaled the warmth. She couldn’t call Aun or Lay Peng, or Deen or Raj—they’d all be working right now, possibly even desperately covering for all the work she’d left behind when she quit, probably even working off that unending to-do list she’d stuck in the front of the file while cursing her. Though she had tried to close up as much as possible before she left. It wasn’t her fault that in the last week of her three months’ notice, whoever that idiot was behind scheduling (her boss) decided that they really, really needed someone on that last-minute job and the only one with a blank week was…her. Because she was leaving. And she needed to close out all her files.

But nope. New client it was, no matter how idiotic it was.

Anyway. Not her job anymore.

She rolled on her left side, kicking the blanket off and reached for her phone, squinting at the large numbers. It was only eight in the morning. Way too early to be awake on what should be technically a holiday. Well, a weekend. What had she done in the past when she took her annual leave? Oh right—she only took leave to go travel, which meant she had a whole new place to explore, or when she went back home, which meant her mother would put her to work doing something. Like marketing.

Jasmine got out of bed and shuffled to the kitchen. She blinked and stretched, then sighed as she opened the fridge. It looked terribly empty, even more empty than usual. Right, she’d finished up her leftovers yesterday because she got home late, even though she’d already surrendered her laptop and work badge by the time HR and IT left at five pm. There was a lot she could do just by talking to her team and pointing at their screens.

Not my job. Not my problem. Not anymore. They’ve got it.

It should be easy to remember, seeing that she’d turned in all her company property, but it was like this void. In her heart. An emptiness. Maybe she should do some marketing. All she had was cereal and since she wasn’t going to work today (or for the next few days until she found something else to do) she would have to make her own lunches and dinners. Jasmine laughed at herself until she cried.

When she was done laugh-crying, she washed up, took a shower, and sat down to cereal and milk and the book she’d bought two years ago but hadn’t had time to read. By the time she was done with it, it was four in the afternoon and she was hungry. She didn’t feel like cooking (not like there was anything remotely cookable in the fridge) so she ordered something random off Grab. And then she started another book.

It was Thursday night (how had six days passed by so slowly and yet so quickly?) before she decided she should do something a little more productive than binge-reading all her TBR and ordering food on Grab because even though she had a lot of savings (she hadn't had the time to spend it), it wasn’t going to last forever. She hadn’t talked to a person in days other than acknowledging the Grab driver and grunting at the guard when she went to pick up her food. She wasn’t even sure if that counted as talking to people.

Tomorrow was Friday. She’d been unemployed for a week. Friday morning, she would pretend she was on holiday and take a tour of her historical city.

I mean, people travel all the way here for holidays, right? Why not be a tourist in my own city?

She rather liked the idea of a staycation.

Here's where you can find out more about The Tea Novel!!! Which doesn't have a name yet. Or even a properly thought out plot. But eh, it's the first draft of a WIP so things will sort themselves out...eventually.