Reaper of Souls by Rena Barron
My rating: 4 of 5 stars

Arrah has magic now, the only one who does. She's the last witchdoctor. She carries the voices of the chieftains and the burden of the murdered tribes. But what if some of them survived? She needs to visit the tribal lands, to try to find them - in hopes that they can help stop the Demon King's impending return. Add politics into that mix, with the acting Almighty One doing all he can to stay in power, and you have a mind-blowing fantasy epic.

Okay, I jumped into this one without rereading the Kingdom of Souls, which may or may not have been a good idea because I don't quite remember anything that happened in the first book except that I liked it (oops). I did reread my review, so that helped a little! This was probably the reason why I floundered a little in the beginning, trying to remember who was who and who did what! I kept thinking, 'there's something more to this, isn't there?' but couldn't remember what.

Reaper of Souls is a story of love and sacrifice, both the sacrifices made for the sake of love, and the love that is sacrificed for the sake of others. Arrah and Rudjek face terrible choices, but so too did the gods themselves. And it is this past immortal drama, full of secrets and stark choices, that has landed all of them in this current predicament.

But oh God (gods?) - and this is really the good part - even with my slow, struggling start, each layer builds on each other, with each fresh revelation, each new twist tying together into this really inevitable ending. Barron keeps you guessing at some parts (ha, and I guessed wrong a couple of times), but she leads you so well that when you reach the end, you can only react in both awe and horror.

Note: I received a digital ARC of this book via NetGalley. Opinions expressed in this review are completely my own.

Note to self: It's a good idea to reread these first two books before Untitled

#musicmonday: A King and a Kingdom | Derek Webb

I suppose, in keeping with the Joneses, or whoever it is who lives near me (Lees? Oois? Lims? Yims?), I should do a year-end review. I used to do one every year until I got lazy.

But since I can't seem to concentrate on getting anything done, I suppose I should have one last hurrah on this year-end thing, then go and read in bed (currently reading: A River Called Time) until the new year dawns.

Things I Have Accomplished This Year

(Keep in mind that I haven't actually published anything this year, other than that one short story in the Home Groan anthology. But this also means that I *may* have multiple things to publish next year, funds permitting.)

Here's My Year in Books! I credit the high number to several rounds of binge-reading during MCO.

I suppose my top 5 reads this year would be:

How did I choose these? Well, I went back to see my 5-star ratings in Goodreads this year. The top 3 were obvious choices. Then I discounted those that I liked enough to give 5-stars but wasn't bothered enough about to actually write a review. Then I whittled it down from there.

These are the top 5 posts for the year, that I'm too lazy to link to.

And here's my all-time most popular post: Why Your England So Bad?

Other Miscellaneous
I can't think of anything else to, I guess I'll end it here.
Have a great 2021, or at least a not-so-awful one.
Posted by Anna Tan at 9:46 pm No comments:

#bookreview: Captain Arnold and Other Tales of the Abnormal | Arthur M. Doweyko

Captain Arnold and Other Tales of the Abnormal by Arthur M. Doweyko
My rating: 3 of 5 stars

You know that feeling when you finish reading a story and you're kind of left wondering... what really happened there? Sometimes that feeling is one of wonder and open possibilities. Sometimes, it's just a vague feeling of disconnect, like there was something that you were supposed to get, but you missed.
Captain Arnold and Other Tales of the Abnormal was a mix of both for me. The short stories were amusing and intriguing--and some unsettling and scary--but there were quite a few that left me feeling like I would have liked them more if I could just...get...whatever "it" was.

Several that I quite liked:
Nothing to See Here
Billy and the Time Machine
What Goes Around
The Translator
Retirement
The Zoo
Son
Lost and Found

8/17 - not quite that bad a ratio.
The collection includes Doweyko's original art, so that's pretty cool, I guess. 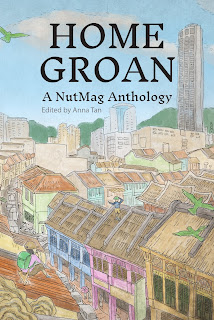 Catherine Chong stood in the middle of the road on Puncak Bukit Mutiara and stared at the house in front of her. It was a squat, blocky thing that didn’t look like much from the outside—standing at road level, it appeared to be a very small single-storey house with a tiny front porch.

She frowned at it, then checked the address again.

It was the right house…

But it wasn’t what she’d expected to see, not with the vague memories she still held of this place. It was supposed to be huge, palatial. Three-storeys high, a wonderland she and Julia had roamed, going from room to ever larger room, conquering balconies that overlooked the sea, snuggling in the white wicker swing.

Maybe it’s bigger on the inside. Catherine snorted as she stepped off the road and approached carefully. It’s not a Tardis.

Walls spread out on both sides, blocking the rest of the house and its grounds from sight. That, at least, felt right.

She knocked on the door. A minute later, Catherine slapped her forehead. Obviously, no one was going to answer because no one was currently living there. She had the keys in her pocket. Still, her school friends had once told her it was courtesy to knock anyway, to let any spirits living in there know you were entering. Catherine wasn’t sure if she believed in spirits, or if that rule applied to anything other than hotel rooms. She dug in her pockets and pulled out the keys.

A soft “hello” still slipped off her tongue as the door creaked open to a mid-sized room with sagging racks and shelves. For a moment, she was transported back into the past, a seven-year-old clinging to her mother’s hand as she visited a new school friend for the first time. Julia had been sitting in the wicker swing, her twin, James, perched somehow on its rounded back, both staring with identical large, brown eyes.

The swing now lay on the floor, the sad, rusty chain dangling from the ceiling.

Catherine stepped in without taking off her shoes or closing the door. Despite the still-bright daylight, the interior of the house was rather dark. She fumbled along the wall until she found the light switch. There was a faint fizzle and then nothing. With a sigh, she pulled out her phone from her pocket and turned on the torch.

The room didn’t open out to a bigger living room; it led instead to a circular stairway heading downwards.

Of course, you dummy.

She’d remembered the three floors right, just not the direction. The house went downwards, not up.

Catherine hesitated at the top of the stairs, looking down into the dark hole that gaped before her. She glanced at her phone. It was already six in the evening. If the house was already this dark now, she didn’t want to be inside when the sun set without a proper torch, or working lights. She made her way back out of the house, turned off the phone torch, then locked up.

“I’ll be back,” she said aloud, though she wasn’t sure who she was speaking to—herself or the house. Maybe both.

Check out our NutMag blog tomorrow for another excerpt!

Want to get your hands on a copy? PREORDER NOW for special rates and packages!

Domesticating Dragons by Dan Koboldt
My rating: 4 of 5 stars

Noah Parker needs to get into Reptilian Corporation - the genetic engineering firm headed by inventor Simon Redwood that has cracked the code to hatching real-life dragons. Or, well, synthetic reptilian predators designed from genetically-engineered reptilian genomes, but who wants to say all that?

And with his biological simulator plus an added behavioural module, Noah can help the company design family-friendly pet dragons to replace the dogs they lost in the canine epidemic. On the side, Noah's hard at work trying to find a way to secretly use Reptilian's resources and advances in genetic sequencing to help fix one problem that's close to his heart... besides dodging scrutiny for, uhm, Octavius.

Domesticating Dragons was an enjoyable read. Koboldt put his training as a geneticist to good work, but as he assured me, it's not SO hard-sciencey that you can't follow along. It's not all about the dragons, though - what drives Noah is his loved ones, especially the welfare of his brother Connor. And it's not just family. Noah comes across as a guy who just... cares for people in his own way, whether it's his team at work - working collaboratively and sharing credit - or that slightly annoying roommate of his ex who's fighting him for the top spot in their geocaching race.

Anyways, back to dragons, I went into this thinking, what, haven't we learnt from Jurassic Park yet? And it seems we have. Reptilian Corporation takes safety of their dragons veeerrryyyy seriously even if their owners don't (the customer service call logs are hilarious!) and if we were anywhere close to this in the real world (are we? I have no clue), we might actually have a chance to get our own little pet dragons. How fun!

Note: I received a complimentary digital ARC from the author. Opinions expressed in this review are completely my own.

View all my reviews
Domesticating Dragons releases on 5 Jan 2021! You can preorder your copy now. :D
Posted by Anna Tan at 9:30 am No comments: