#bookreview: The Rogue Retrieval by @DanKoboldt

Today I have the pleasure of hosting Dan Koboldt's new book, The Rogue Retrieval on my blog! The book launched yesterday (well, today for those of you in the past, heh) so you should really go grab it.

The Rogue Retrieval by Dan Koboldt
My rating: 4 of 5 stars

Quinn Bradley, stage magician on an off-strip theatre in Vegas, is about to get his big break. Except it never comes. Instead, he's offered a lot of money to help a huge corporation infiltrate Alissia, a world connected to ours by a secret portal. What they want is his talent in illusions to help them retrieve the head of the research team, who has gone rogue. But when the real magicians of Alissia come after the impersonator, Quinn has only his wits and his stage props to keep him alive.

The Rogue Retrieval was a great read but I'm wavering between an "I liked it" and "I really liked it". I mean I liked it more than a generic 3-star, but it didn't really capture me all that much to put it as a definite 4-star. I would say it's hovering somewhere at maybe 3.75?

Expectations. Haha. You see, the blurb mentioned the magic word "Terry Pratchett" but the novel didn't quite deliver on that. I was expecting ridiculousness, downright funny scenes, scathing commentary on the real world via ludicrous events in the other world, but The Rogue Retrieval was quite a bit more serious than that. Terry Brooks was a good mention/comparison though - normal human discovers (or in this case is sent) through a portal to a new world. One that has magic. Sounds like a good read already.

Which leads to the next problem. There wasn't enough magic. Or science.
Quinn does a lot of tricks and manages to dazzle many people with his illusions, usually to get the team out of a tight spot. The real magicians only show up somewhere about 39% of the way through the book, which would already have lost some hardcore fantasy readers. Even then, the magic is subtle, often understated - which isn't a bad thing, except that it somehow ends up leaving you a little underwhelmed.
As a scientist, Koboldt can't leave the science alone and that's seen in how he bookends the magic in Alissia with the high tech in CASE Global's base as well as the gadgets that Quinn uses to create his illusions. It's kind of like you start off in a science fiction, meander into a fantasy, things get stirred up together in a glorious cross-genre (is that what you call it?) and then you end back in the science fiction with the hope of more fantasy in the sequel.
(I mean, yeah, scifi & fantasy are always placed together but the readers are so very different, don't you know? This story is a mash up of both and you'll either get people who love both and love the book or you'll have disappointed readers from the extreme end of both spectrums.)

But going back to magic, in a key scene (which I probably shouldn't talk much about, because spoilers?), I felt a little cheated by how it turned out. Well, not quite cheated but at least disappointed.Then again, that scene alone probably tells you what Dan Koboldt is good at. He keeps you rooting for Quinn, the weakest member of the team, letting you feel his vulnerabilities but also showing you his unexpected strengths; even if those strengths don't seem quite right for the mission. You feel disappointed when he fails, and you get angry when he makes excuses. Because you want him to finally get his breakthrough.

The Rogue Retrieval is really a knight's quest in disguise; except our knight is a magician and his true quest is to harness his power.

Note: I received an ARC for review via Edelweiss 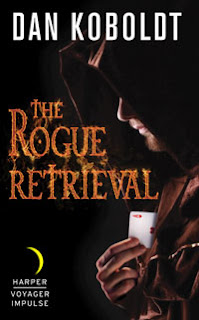 Sleight of hand…in another land

Stage magician Quinn Bradley has one dream: to headline his own show on the Vegas Strip. And with talent scouts in the audience wowed by his latest performance, he knows he’s about to make the big-time. What he doesn’t expect is an offer to go on a quest to a place where magic is all too real.

That’s how he finds himself in Alissia, a world connected to ours by a secret portal owned by a powerful corporation. He’s after an employee who has gone rogue, and that’s the least of his problems. Alissia has true magicians…and the penalty for impersonating one is death. In a world where even a twelve-year-old could beat Quinn in a swordfight, it’s only a matter of time until the tricks up his sleeves run out.

Fans of Terry Brooks and Terry Pratchett will find this a thrilling read. 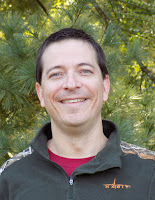 Dan Koboldt is a genetics researcher and fantasy/science fiction author. He has co-authored more than 60 publications in Nature, Human Mutation, Genome Research, The New England Journal of Medicine, Cell, and other scientific journals. Dan is also an avid hunter and outdoorsman. He lives with his wife and children in St. Louis, where the deer take their revenge by eating the flowers in his backyard.

I'm launching Coexist with a cover reveal in March and a blog tour in April. Let me know if you want to help host!