Algorithm by Arthur M. Doweyko
My rating: 3 of 5 stars

Touted as a fast-paced, science fiction mystery/thriller, Algorithm is one of those stories that I wished I liked more than I actually did.

The story itself is great - Adam Dove finds an ancient gold medallion in a lump of coal. When he starts investigating, things start happening: his college's laboratory is destroyed, dangerous people with guns start chasing him, a friend ends up dead - or maybe Adam just dreamt that last one up. With the help of his coworker, Linda Garcia, and the crotchety owner of the mining museum, Hedda Morrison, Adam sets out to solve the mystery of his gold medallion - which may very well be the mystery of human origins.
The one person who seems to be able to answer their questions about the medallion poses a significant problem. Is he really who he says he is, and can they believe what he says of his mission, the origin of the medallion and his offer of space travel?

Okay - maybe I figured out where it went wrong for me. Algorithm is a little too hard science for my taste and the narrative was dryer than I preferred. I liked the concept and the storyline, but the execution fell a little short for me. I don't really know how to explain it, except that maybe it could have been paced better. It kind of felt like Doweyko had this great story in his mind, epic, really, but ended up making a sophisticated version of "this happened and then this happened." So many things were happening and so many theories (sciency ones at that) were being thrown around in dialogue that you didn't really get to sit down and wonder at it and feel it. (Or I could just be an emotional female reader. hah)

All in all, it was still an interesting read though it could have been better.

Note: I received a copy of this book from the author in exchange for an honest review.

Strange deja vu moment: there were these few pages in part 2 that seemed somewhat familiar, as if I'd read them before. Either they appeared somewhere in a preview (highly unlikely, since it's towards the end of the book), I'd accidentally flipped to them before (improbable, since the PDF version provided for review doesn't have bookmarks), it's appeared as a short story somewhere online (maybe) or I might have read a bit of it on Wattpad (though I haven't browsed Wattpad in ages, it was there before and DID win a Wattys award, so maybe that's it). 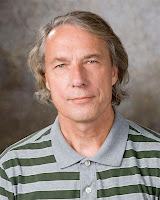 Arthur has authored over 100 scientific papers, invented novel 3D drug design software, and shares the 2008 Thomas Alva Edison Patent Award for the discovery of Sprycel, a new anti-cancer drug. He writes science fiction and fantasy. His novels include Algorithm (2010 RPLA award), published in 2014, and Angela's Apple (Best Pre-Pub Sci-Fi RPLA 2014), under contract with Red Adept Publishing. Many of his published short stories are award-winning (including Honorable Mentions in the L. Ron Hubbard Writers of the Future Competition).

When not writing or painting, he teaches college chemistry, and wanders the Florida beaches.

I'm launching Coexist with a cover reveal in March and a blog tour in April. Let me know if you want to help host!
Posted by Anna Tan at 9:30 am