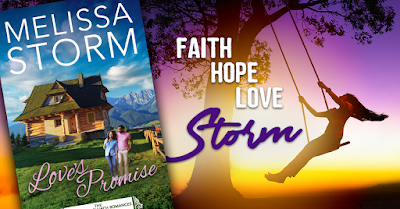 Kristina clapped as her friend took the pulpit. She had never seen Elise in front of her youth group. Even though they were best friends, Kristina hadn’t been back to youth group since she’d graduated to the big church. A few times per year, Pastor Bernie would take a Sunday off and ask Elise or one of the elders to deliver the week’s sermon, but the teen members of the congregation understandably required a different message and a different style when it came to their own church services and events.

All around her, the kids settled onto their blankets with plates of fried chicken, potato salad, and other fatty picnic fare. Peggy, a girl who worked at the diner sometimes on nights and weekends, joined Kristina on her blanket. “Hi,” she whispered with a grin as Elise flipped on the microphone and shouted, “Boo!”

Kristina jumped back, unprepared for the loud noise that shot through the auditorium. Nervous laughter erupted around them, but Elise stood stock still with a serious expression on her face.

The laughter quieted, and everyone sat waiting to see what their youth pastor would say or do next.

“Fear,” Elise said, enunciating the word slowly, taking time with each sound. “What is it?”

Answers rose up from all around the room.

“Not knowing how things will work out,” Kristina said through the laughter.

“And were you afraid just now when I shouted boo right here out of the blue?”

A chorus of Nos rippled through the room.

Elise pouted and stalked forward on the stage. “But it was unexpected. You didn’t know what would happen next. A lot of people find shocks like that scary. Why didn’t you?”

“Because you’re not scary.”

Elise perked up, her eyes wide and voice booming. “Ahh, so I failed in my attempt to scare you because you know me, because you trust me to take care of you?”

Everyone nodded and murmured their agreement.

“You know who else is there to take care of you? God.” Elise bobbed her head and traced her way back to the pulpit. “God’s gotcha. 100% of the time, He is there and He’s got your back. So then why do we continue to live in fear? If I couldn’t scare you, then why does life scare you when you know God is just around the corner rooting for you, ready to catch you if you fall?”

Nobody said anything. They all waited to see what their youth pastor would say next, Kristina Rose most of all.

“Easy in theory, right? But hard in practice,” Elise continued. “They say practice makes perfect, but no one is perfect outside of Jesus. Practice can make better. Practice can make easier, but none of us are perfect. It’s kind of why we need God in the first place. It’s why we need to trust Him with our fears rather than trying to figure everything out for ourselves.”

Oh, now she understood why Elise had dragged her here. She saw Kristina’s fear loud and clear. It was in everything she did, no matter how hard she tried to act otherwise. Elise did love to showboat, but she may have also chose this method of delivering her message so that the kids would be there to back her up, so it would feel less like a personal lecture and more like something Elise was sharing with all of them.

“It’s a lesson we’ve all learned since Sunday School. God’s got you. So then why do so many of us forget as we grow up? As we face new challenges? Why do we think we can do it all ourselves? Why don’t we depend on God for help?”

Elise reached under the pulpit and pulled out a small black gun. She closed one eye, and stuck her arm straight out toward Kristina Rose.

Nervous laughter broke through the sanctuary once again.

“You’re laughing. Why are you laughing? I have a gun. A gun! Shouldn’t you be afraid?”

“We know that’s not a real gun, Elise,” Peggy said, making a pistol gesture with her thumb and index finger and pointing it back at Elise.

“Are you sure about that? What makes you think it’s not real? It’s the right color, right size, right shape.” She widened her stance and turned the gun to its side, setting up for a kill shot. “Are you scared now?” she asked, her voice flat, menacing.

“No, I’m not,” Kristina answered. “I know you’d never actually shoot me with a real gun.”

“How sure are you? Would you bet your life?” She took two steps forward, unwavering in her aim.

Kristina nodded. “I trust you not to hurt me.”

Elise pulled the trigger and a stream of water hit Kristina on the leg.

The audience laughed some more. It seemed they did a lot of that whenever Elise took the stage.

“Told ya! We knew it wasn’t real,” they shouted.

Elise returned the gun to the pulpit and banged on her chest with the mic. “Did you see that? Did you see that? Kristina Rose trusted me to shoot her—to shoot her!—because I’m her best friend and she knows I won’t hurt her. But that’s all I am, a best friend. God is our father. Of course He wants what’s best for us. Of course He would never hurt us without a reason.”

She gave that a minute to set in before jumping off the stage and pumping her arms as she walked animatedly between the blankets. “Here we are, going about our business, and—whoa—a new danger appears.” Elise jerked forward and threw a banana peel she’d been hiding onto the ground in front of her.

This time Kristina found herself laughing along, too.

“Don’t laugh!” Elise warned, spinning around to look at everyone in turn. “This is dangerous. I could slip and fall! How can I keep walking forward when there’s this huge dangerous thing just waiting to knock me off my feet?”

Elise did as instructed with a skip. “Pfffhew, I’m safe!” she cried.

Kristina Rose loved watching her friend in action. She had no idea her sermons involved so much physical comedy, but it all made perfect sense. This is just who Elise was—passionate, energetic, the star of the show. They made a great pair, Elise and Kristina, because while one craved attention, the other was all too happy to let somebody else take center stage. Had they been enabling each other all this time?

Elise winked at Kristina Rose, then rolled her eyes and jogged back up to the stage. “Yeah, yeah, laugh it up. I know this is all fairly ridiculous. Who slips on a banana peel other than maybe a cartoon character? But here’s the thing: in hindsight, many of our problems seem equally absurd. Why didn’t I just tell her how I feel, or why didn’t I just take the plunge? Well, I’m here to tell you today, God doesn’t give us problems we can’t handle. You know what Kelly Clarkson says: ‘what doesn’t kill you makes you stronger.’ Well, I want to be strong. Don’t you?”

“I want to be strong,” Kristina said.

Others murmured in agreement.

“Well, guess what. So do I, but you know what else? I can do all things through Christ who strengthens me. Say it with me this time…”

Everyone shouted in unison, “I can do all things through Christ who strengthens me!”

“Yes, you can.” Elise stooped down to pick up the banana peel, curled it into a ball, and then made a free shot at the trash basket.

Some muted applause followed the swish straight into the bin.

Elise tapped her heart and pointed toward Heaven. “Now when we break into group, I want us to share our fears, share our problems, and then place them at the Lord’s feet. Trusting in God doesn’t mean that you give up trying. It just means that you know you’re going to win in the end. It brushes aside the worry, makes the task of living a much more enjoyable—much easier—thing to do. How would your life change if you stopped being afraid and started trusting in God to lead you to the place you need to be?” Elise locked eyes with Kristina Rose as she asked this.

Kristina had no idea whether she was meant to answer, but luckily she didn’t have to. A series of beeps and whirls sounded from beside her, and all eyes zoomed toward the blanket where she sat with Peggy.

“Oops! Sorry!” Peggy leaped up and waved her phone by way of explanation. “I forgot to silence it, but it’s my boss. I have to take this.” She rushed out in the hall, leaving Kristina to wonder why Mabel would be calling on a day she knew Peggy would be taking off to attend the retreat.

“Let’s all clean up our plates and move our blankets into a circle,” Elise said, striding over to help Kristina Rose adjust hers.

“Was that for me?” Kristina asked quietly while the kids laughed and joked with one another.

“It was for everyone, but, yes, inspired by you. I love you, you know, and I want you to know that you’ve got this, that God’s—”

“God’s got me?” Kristina finished for her friend. “I know. Thank you so much for the reminder.” She's waiting for her prince to come … but was he right beside her all the time?

Kristina Rose Maher wants to know why fairytales never happen for fat girls. Certain that diner cook Jeff, handsome and fit, will never want her as more than a friend, she stuffs down her attraction to him. But when she finds herself facing a life-altering weight loss surgery, she discovers she's willing to do whatever it takes to embrace life—and love—to the fullest.

Jeffrey Berkley can't bear the thought of losing the friend he’s only just beginning to realize matters so much to him… no matter what size she is. But he is also terrified that helping her reach for her dreams will also mean finally reaching for his own—and letting down his family’s legacy in the process.

Both Kristina Rose and Jeffrey must learn to love themselves before they can find a way to make a promise to each other. Will they finally be able to lay their heavy burdens at the Lord's feet, and trust him to bring the happily-ever-after they both crave? 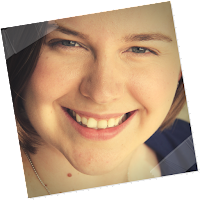 Melissa Storm is a mother first, and everything else second. Her fiction is highly personal and often based on true stories. Writing is Melissa's way of showing her daughter just how beautiful life can be, when you pay attention to the everyday wonders that surround us.

Melissa loves books so much, she married fellow author Falcon Storm. Between the two of them, there are always plenty of imaginative, awe-inspiring stories to share. When she's not reading, writing, or child-rearing, Melissa spends time relaxing at home in the company of her four dogs, four parrots, and rescue cat. She never misses an episode of The Bachelor or her nightly lavender-infused soak in the tub. Because priorities.

Join us at the launch party!

I'll be hosting a slot from 11am - noon today (March 6, 10pm - 11pm EST) at the launch party so do drop by then! Well... drop by the whole week-long fest from March 6 - 11 for daily giveaways, games, and fun conversations and behind-the-scenes info. 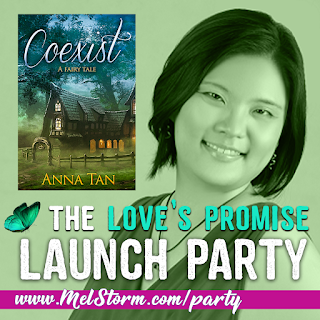