Sooooooo I've been dreadfully behind on my Camp NaNoWriMo goals, even though I've already reduced it drastically.

But yesterday, I did this. 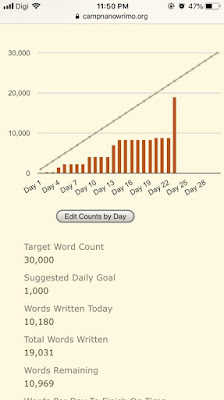 So it's all good, at least until I have to hit my next goal tomorrow.

Rahsia wakes up with a crick in her neck. She doesn’t recall why she’s sleeping on the floor in such an awkward position. It’s not as if she fell asleep drunk last night, unless the priest had spiked her tea. He wouldn’t have done that. He couldn’t have done that either, unless he’d brought it with him. There is no alcohol in her house. No drugs of any kind either.

She stretches, feeling aches all along her body. The first thing she does is go in and stare at Iman. Nothing has changed. She goes into the bathroom and takes a long, hot bath until a pounding on the door reminds her that the healer was supposed to come. Has arrived. She scrambles to dry herself and throw on some clothes, kicking her discarded ones into her room and closing the door. By the time she reaches the door, the healer is scowling.

He nods and pushes past her. His inspection is a repeat of everything he did the day before.

“Did you find out anything about this, uh, medical suspension trance thing?”

He’s out within minutes, leaving with an admonishment for her to remember to “water Iman.”

Rahsia giggles uncontrollably for the next five minutes. When she finally catches her breath, so goes to do as she’s told. Iman now feels to her like a houseplant. It’s a terrible thing to think of about your best friend, but it’s also a wonderfully amusing thing to think of your worst enemy. She can’t decide which category Iman falls into now, so she just refers to her as her plant. She must be careful not to say it in front of the children.
Posted by Anna Tan at 12:42 pm