Deeplight by Frances Hardinge
My rating: 5 of 5 stars

I WOULD HAVE READ IT FASTER IF I WAS NOT TRAVELLING.

...which is a strange way to start a review, but it's truth. Deeplight is one of those books that demands you devour it in one, or at the most two, sitting and I feel that I have done it a disservice by reading it so slowly. lol.

In premise, at least, Deeplight pings a little bit of Pratchett's Nation--the gods are dead, what do humans do now? Well, the humans in Hardinge's island chain of Myriad are making profits out of it by diving into the seas and collecting godware for sale. What Hark does best is tell stories, a skill that often helps get him out of trouble--and scam continental tourists for easy money. When a job goes wrong, Hark's life changes in many ways, and not always for the better.

Deeplight feels in many ways like an exploration of the various friendships that a troubled young person may have in their life and how it impacts them. There's Quest, the ex-priest, who trades stories for stories in a bid to understand Hark and offer advice. There's Kly, the Sanctuary supervisor, who has a soft spot for Hark and offers him leeway and understanding even when he messes up. There's also Dr Vyne, the one who bought his indenture, who offers him a second chance and a brand of tough love that keeps Hark on the safe and narrow--for now.

And then there's Jelt. The childhood friend and protector who has saved him many times--from the exact same trouble he caused. Hark's friendship with Jelt is a clear case of abuse and gaslighting. It sat uncomfortably with me in the beginning, seeing the way Hark question his own decisions and push aside his worries just because he feels like he owes Jelt something, that Jelt--being bigger, stronger, better--may be right about his cowardice and disloyalty. I wanted him to break away from Jelt, to stay clear of that obviously toxic relationship, but in a novel, things have to happen so again and again, Hark gets sucked into Jelt's downward spiral, drowning in deeper and deeper waters even as he tries to stay clear of the heavy hand of the law.

But Hark has resilience and Hark also has good, wise friends in Quest and Kly and Selphin who together try to save the world from ending.

Note: I received a complimentary copy of this book from Pan Macmillan via Netgalley. Opinions expressed in this review are completely my own.

View all my reviews
Posted by Anna Tan at 5:30 pm No comments:

A Kind of Death: Tales of Love, Loss, and Transformation releases today!

A Kind of Death: Tales of Love, Loss and Transformation releases today!


Which means you can finally read my new short story, Takpe. If you've already preordered a kindle copy, it should be dropping into your kindle soon. If not... what are you waiting for? Go get your copy now! 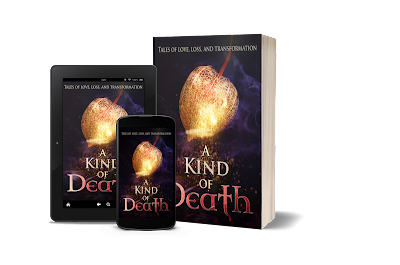 A princess who makes dangerous bargains with the afterlife. A man desperate to save his wife, no matter the cost. An uber driver for the undead.
Death, whether real or metaphorical, comes for us all. Yet it is not always the end. And in the depths of grieving can be the promise of hope and redemption.

The tales and poems in this anthology explore the depths of love, loss, and transformation. Whether in a reimagined folktale or a modern urban fantasy, A Kind of Death features a fine balance of tragedy and comedy, but always with a hint of wonder and hope.

As this anthology concerns matters of loss (all handled tastefully and without graphic depiction), certain stories might prove challenging for sensitive readers. Recommend reading with a hot beverage and/or a packet of tissues.

Uncommon Universes Press is a traditional publishing company featuring fresh science fiction and fantasy stories with wonder, adventure, and sacrifice. Check out the links below to learn more! 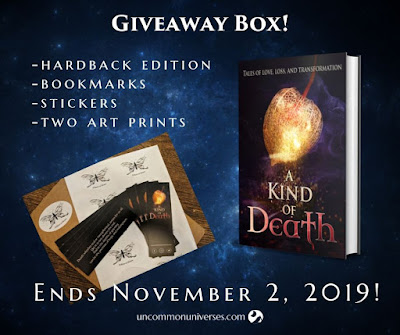 a Rafflecopter giveaway
Posted by Anna Tan at 4:00 pm No comments:

#fridayflash: A preview of Takpe from A Kind of Death 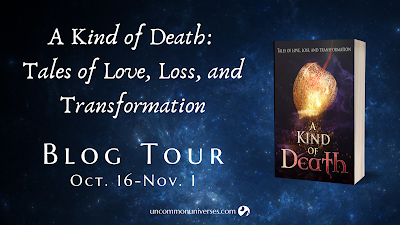 There is a nail in the back of Nur’s neck. She doesn’t know why.

She doesn’t think about it often, though sometimes when she bathes, her fingers touch it and she shudders. She doesn’t pull it out; she can’t, she’s not allowed to. Her husband Bakri doesn’t talk about it, changing the topic whenever she brings it up. She doesn’t anymore.

She wants to please him.

No one else she knows has a nail there. She’d seen a girl before, on that one trip to Kuala Lumpur for her daughter, Alia’s, medical check-up, a mat salleh with short purple hair and two little metal balls at the nape of her neck. The mat salleh had a lot of other metal pieces all over her body, so Nur doesn’t think it’s the same. Nur has looked carefully at all the other women in her kampung, her village. Most of them keep their hair in buns, under scarves, out of their faces. She leaves hers down, black and silky, reaching to the curve of her back. Bakri doesn’t like her to cut it, so she doesn’t.

Bakri comes in the front door, kicking off his shoes, and stooping to scoop Alia up. “And how has my little Alia been all day?”

Alia wiggles and squeals as he tosses her up in the air. For a brief moment, her fine, wavy hair circles her round face like a halo, then flops down, tussled bangs across her forehead, fluffed up around the back of her head like a little button mushroom.

Bakri winces as Alia tugs at his goatee, catches the small hand to still its grasping. His smile is wide and generous, filling out the sharp contours of his sun-darkened face.

Nur smiles, getting up from the couch. “Her birthday is coming up next week, abang. What do you want to do?”

“Ooo, my little Alia is going to be one, huh?” Bakri perches the little girl on his hip as he steps closer to Nur into the living room. Three steps to the right, and he would bump into their dining table. She’s not sure why she keeps this distinction in her mind when it’s all one cosy room. She lifts his leathery hand to her forehead, brings it to her lips.

He is all that fills her soul.

When he pulls away, she notices the sadness in his dark brown eyes he always gets when looking at her. Why, she wants to ask, but doesn’t. He never tells her, only shakes his head, saying takpe. It’s nothing.

“Should we have a party, abang? Invite the everyone from the kampung?” she asks. Birthdays are meant to be village-wide celebrations, a matter of pride—she knows this much. He keeps apart for her sake, but for this, for Alia, maybe he would want to do it right.

“Let’s keep it small, eh, Nur? No need to call everyone.”

She nods, making a mental list of their close friends. The neighbors on their left, Pak Ali and his wife Timah, but not the ones on the right; they don’t like Nur. The Penghulu, definitely—the village chief would feel slighted if he and his family weren’t invited. The two little girls Alia plays with and their families…

“Nur, is dinner ready?” Bakri asks, pulling her out of her thoughts.

“Ya, abang. Sorry!” She puts her thoughts aside and heads into the kitchen. Everything is prepared. She left them in the pots to keep warm and all she needs to do now is serve them.

Tonight, there is kari ikan, with more ladyfingers than fish, and nasi putih, the rice steamed and fluffy. Nur wishes there were more dishes, but it’s all they can afford. If they slaughter a chicken, tomorrow they might have meat, but then what would they do for eggs in the future? The banana trees in the back make up for it. She finds them comforting. Alia loves them as a snack, whether fresh or fried in batter. Bakri—he turns away from the fruit, looking sick. Although she remembers, somehow, that he used to love pisang goreng, loved it fresh and dripping with oil, the batter they’d been dipped in a recipe handed down from her grandmother. She remembers that, although she cannot remember anything else, not since the incident.

She shakes her head. “Takpe.”

The phrase passes between them so often it too means nothing: Takpe. Takde ape-pe. Doesn’t matter. It’s nothing. Never mind. It’s fine.
They talk about birthday parties instead. 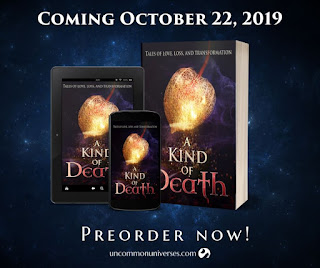 Note: paperback and hardback preorders will receive exclusive A Kind of Death swag!

a Rafflecopter giveaway
Posted by Anna Tan at 4:30 pm 2 comments: