It was smaller than she expected, roughly about the size of a big dog. It stared at her with liquid eyes, a deep blue against its baby blue form.

“Yes,” it seemed to bristle.

“But, you’re so small, and… transparent.”

The statement refused to wrap itself around Cassandra’s brain. “You’re a dragon, aren’t you? Not a dwarf? Those have beards, right?”

“Yes. I’m a dragon. Something went wrong with my genes somewhere, so I can’t get any bigger. It’s called dwarfism.”

“You’re not a baby dragon?”

“I am eight hundred and eighty eight years old,” it grumbled, “and you ask me this? To answer the rest of your unspoken questions, I am male, as far as you humans understand it, and I am semi-transparent because of my nature.”

“I am a water dragon,” he said, shaking his mane a little, “and as water goes, it’s never entirely solid. Well - except when it turns into ice, which will only happen when I’m dead.”

“When you die you turn into ice? Like a sculpture?”

“Kids these days…” the dragon mumbled to himself. “Get on with it then.”

“Whatever it was you summoned me for. Or do you mean to say that you made me come all the way here for nothing?”

“I’m not entirely sure. How did I summon you?”

“You wished me into existence.”

“Fine. So if you need nothing from me, I’ll be going then. A lot of things to do back home you know, with this new year coming and all that.”

He seemed to shrug irritably; impatiently.

“Sorry to have disturbed you then. Really sorry.”

“There is something you want, isn’t there? Ask. I don’t have all day.”

“May I touch you?” she said, immediately following her question with “what’s your name?”

Cassandra stretched out her tiny chubby fingers towards the dragon, touching the cold, slippery scales. He was beginning to fade out of her sight, but with a sudden glance at her, he shrugged a little, allowing the scale she was touching to slide down.

She caught the shiny thing in her hand, gazing at it in wonder. By the time she looked up, he was gone.

“Thank you, dragon!” she called into the emptiness before her. The sky seemed to wink.

Well, this was meant to be Fridayflash, except that by the time I got the time to sit down and write past the first paragraph, it was already Saturday. Night. (No fever).
I find dragons fascinating, especially the fact that there are so many different kinds of them.
There's the dragons, called up by imagination, from Terry Pratchett's The Colour of Light. Well, I think it was that one, or at least the next. Also, the fire-breathing ones that Sam Vimes' wife (I forget her name? Lady something) breeds.
There are the dragons in Ursula Le Guin's Earthsea series, who straddle between two worlds, where their name summons them, where the Word is Power.
There is Smaug from Tolkien's The Hobbit, drawing on old lore of fire-breathing dragons who hoard gold, protecting their soft underbellies with a coat of jewels and gold.
And there are the dragons in Christopher Paolini's Eragon series, bonded to humans and elves, almost wiped out. Murdered.
And there are the dragons in Robin Hobb's Rain Wild Chronicles, contrasting with the stone dragons in the Farseer trilogy.
And in older lore still, the slaying of the dragon, a feat for the knights in shining armour.

And in almost all these stories, varied by the ways the writers have imagined them, these dragons are huge, immense, vast. They breathe fire, and their morality is not our own. They are wise and crafty. Sometimes they are beyond morality, living past the human limitations of good and evil. And you never, ever gaze a dragon in the eye.
Lore, how I love thee.
And I much prefer Western Dragons to Chinese ones, because they have huge impressive wings. Shallow, I know.
Waiting for this to come out in Feb. Not sure when it will hit our shores. And another long wait for the paperback. Sigh. 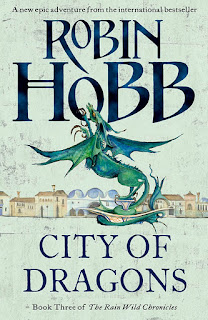