Youth finding their "It" - Guest post by Raphyel M. Jordan

Continuing on with the Prossia blog tour, let's welcome Raphyel with his post on Youth finding their "It". 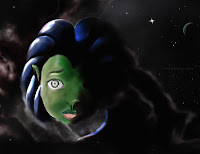 In "Prossia," we follow the journey of a girl named Aly, who was simply trying to make it out of her equivalent to high school (she's an alien) one day, and killing in order to survive the next. She learns what I was learning when I started writing the story , just how fast the world can become a madhouse. I've had some readers say the opening parts of my novel feel like a Disney movie that gets ripped with reality without warning, and I intently wrote it in that fashion. Transitioning into a grownup isn't always graceful, casual, or determined for one's convenience or age. So, when the book was published, and I was in need of a marketing campaign, it asked the one question with my ads: "Where were you when you had to grow up?"
The process of growing up is one that must be made alone. Even if people know about the hardship you're enduring, you're the one left with the burden of not knowing how you're going to get through the obstacle. And who's to say you'll only face grownup decisions at the designated age of 18? Many individuals have lost that sense of innocence years before society dubbed them "grown" due to drugs, rape, child abuse, death, and I'd even put excessive bullying in there as well ("kids will be kids" isn't an acceptable excuse).

But alas! There's always the possibility for greatness after the storm. Even though my book's protagonist suffers hardships from every level, we see her face the challenges as best as possible. Sure, she may gripe about it, she'll wish her burden was someone else's, her faith in herself and others will get shaken without mercy, and her entire perception of how wonderful the real world is will come to a devastating end. Even so, Aly presses on because she has a stubborn inner will that refuses to let life defeat her, even when she so desperately needs to just let go and give in.

And that's what inspired me to write "Prossia," seeing that awesome stubbornness and determination in young people firsthand. It seems society has already designated my generation and the one before me for failure. They say we complain too much, and only want what was inherited by the generation that came before us without putting any effort into anything. And while there does seem to be an obnoxiously loud minority of individuals in our age group that have those traits, I know there's more to the leaders of tomorrow. Trust me. I've seen it firsthand.

I saw it when young single mothers were top of the class, knowing what they doing now would lay out a better future for their child. I saw it when I went straight to work after being at school all day, came back to campus around 12:00 am to finish a ceramics project, and other people were in there as well because they had no other time to work on their assignments. I saw it when friends flipped buggers, only making minimum wage, barely able to pay bills, but still finding what little ounce of time to study for their finals. I saw it when all of these young people, when they were all scraping bread crumbs to keep their nostrils over water, have enough strength to tell me that I could do it because they could.


Moreso, I've seen the strength in youth even before the "college years." A 14-year-old boy had to be the man of the house by taking care of his blind mother and two younger siblings. A little girl inspires an entire community to rally around her family so her father can get money for his cancer treatment. A young Muslim girl inspires an entire nation filled with underprivileged women to stand up for their rights to an education when an extremist group tries to silence her with a bullet to the head. If these aren't signs of power, I don't know what is. These people found their "it" factor, and in spite having people look down on them because of their youths, they stood up because they saw no other choice but to do so. If someone didn't do "it," who would?

Regardless, BE SURE TO HOLD ON TO YOUR "IT."

And no, your "it" may not be the rallying call that will end world hunger or change governments, but it very well may be the thing that makes a stranger's day a little better. So, find it in knowing that there are other people in similar trenches of life with you, even if they're a continent away. Find it in the faith you have, that has taught you to take life one step at a time with each passing day. Find it in yourself, that amazing stubbornness telling you to press forward even though the facts are telling you it's a waste of time and effort. Trust me. "It" is there. You only need to know where to look. ;) 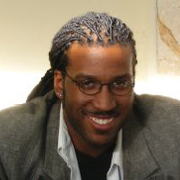 Raphyel Montez Jordan grew up in a household sensitive to the creative arts. As a child, his hobbies were drawing favorite cartoon and video game characters while making illustrated stories. This passion for art never left and followed him all the way up to his high school and college years.
It wasn’t until college when he underwent a personal “renaissance” of sorts that Jordan took his interest in writing to another level. When he was 19, he started writing a novel for fun, taking inspiration from the constant exposure of different ideas and cultures that college showed him while staying true to the values he grew up to embrace. However, when the “signs of the times” influenced the story and the characters to spawn into universes of their own, he figured he might possibly be on to something.
As he studied graphic design at Armstrong Atlantic State University in Savannah, Georgia, Jordan also used his electives to study sciences like Astronomy, Psychology, and Biology in order enhance the reading experience in his story. He eventually made it a goal to have the story published after he graduated, and dubbed the goal “Operation Prosia,” the very same project that would develop into his first published book, “Prossia.”
Even though his novel is not necessarily a religious book, Jordan utilizes his Christian faith by urging people to encourage, not condemn, in his story. Best known for ending his PSFC newsletters with “Unity Within Diversity,” he hopes “Prossia’s” success will inspire people to consider and support the positive outlook in the difference human kind can share, whether it be race, religion, or any other cultural difference.