#review: Here in the Waiting

It has been a difficult week.

If you know me well enough, you know that I don't do well with dealing with people. Especially young people. What led me to volunteer at a youth arts camp for teens aged between 13 - 17 is one thing. I, at least, was somewhat prepared for it. The drama that teens create that do not relate to the Christmas drama (totally not related to camp) was another thing altogether. Add to that hormones. And overall levels of frustration. "Stress" is too mild a word. I had stabby feelings. Very, very stabby feelings.

One thing that has helped me keep my sanity was Josh's Here in the Waiting album. Like seriously.

The songs on this album aren't exactly new to me. I was there at PenHOP during the recording in May, so I've listened to and sung these songs over and over again. But listening to them again in my car was like a breath of fresh air; like a new wind.

HITW is an album of intimacy. Kau Yang Terelok, Surrender and One Glance are love songs to the Father, Hear Him Roar and The Return are declarations of power, Breath of Heaven invites us to invite God to work in us. And Here in the Waiting itself is the heart-cry of a generation desperate to see the Father move.


Maturity is the ability to live in the tension of unresolved questions. It is the ability to navigate the space between the already’s and not-yet’s of life while being fully present in the now. As believers, we are caught in the pull of the kingdom now and yet-to-come, the “fulfillment without consummation”. We see God’s power manifested through healing and miracles, yet see bodies ravaged by disease and lives truncated by death. We see justice movements being raised and released on the earth, yet are confronted daily with the injustices of living in a fallen world. As beings created with eternity in our hearts, it is difficult, even discouraging, to confront the stark disparity between what is and what should be.

And this is the space I've been inhabiting lately. A place where I see the things that should be and yet stand in the place where it is not. I see the so much more that we could be, but I do not know how to get there. And I do not know if we will. And yet we hope. We wait. We long.

In his interview on Selah, Josh says this:


After the final note of the last track has faded and what’s left in the heart of the listener is an aching and longing for Jesus and a desire to love Him more, then it would have all been worth it.

It has then been worth it.

So in lieu of a #musicmonday post and a book review post that's being rescheduled to Friday, here's a song and an invitation. :) 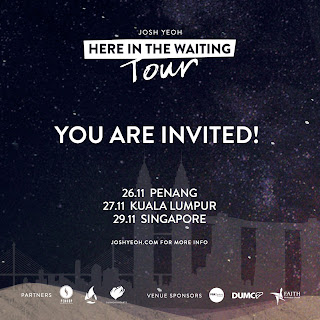