Time to kinda go down the TBR hole again. I found it off one of the blogs I've been following sporadically, and since my "to read" shelf on Goodreads now stands at 444, it might be time to pare it down a little. 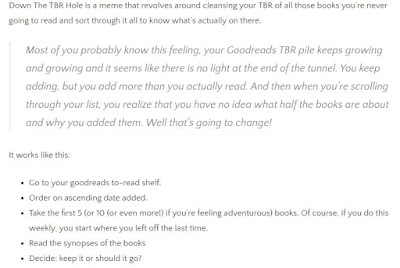 Picking up from where I stopped the last time:

The Silence of the Lambs by Thomas Harris

There's a killer on the loose who knows that beauty is only skin deep, and a trainee investigator who's trying to save her own hide. The only man that can help is locked in an asylum. But he's willing to put a brave face on — if it will help him escape.As famous and classic as this one is... I don't think I'm really that interested in it.

In Enchantment, Card works his magic as never before, transforming the timeless story of Sleeping Beauty into an original fantasy brimming with romance and adventure.

I probably added this when I added everything of Card's. Still, it sounds pretty interesting. I'd like to read it, but I won't go so far as to start tracking it down, so I guess I'll keep it off the TBR for now.

Come here to the magical America that might have been and marvel as the tale of Alvin Maker unfolds. The seventh son of a seventh son is a boy of mysterious powers, and he is waking to the mysteries of the land and its own chosen people.

The Tales of Alvin Maker series continues in volume three, Prentice Alvin. Young Alvin returns to the town of his birth, and begins his apprenticeship with Makepeace Smith, committing seven years of his life in exchange for the skills and knowledge of a blacksmith. But Alvin must also learn to control and use his own talent, that of a Maker, else his destiny will be unfulfilled.

Alvin Miller, a gifted seventh son of a seventh son, utilizes his skills as a Maker to help create a brighter future for America, but his task is further challenged by his ancient enemy, the Unmaker, who plots to end Alvin's life.

Doing this as a set because I have read book 1 and skipped to like book 5 or something, because I couldn't find these three. I probably have them in one of my shelves by now (not sure if all, but at least some) so I guess I should get round to reading this set soon just so I can mark it as read.

The Girl Who Kicked the Hornet's Nest by Stieg Larsson

Lisbeth Salander—the heart of Larsson’s two previous novels—lies in critical condition, a bullet wound to her head, in the intensive care unit of a Swedish city hospital. She’s fighting for her life in more ways than one: if and when she recovers, she’ll be taken back to Stockholm to stand trial for three murders. With the help of her friend, journalist Mikael Blomkvist, she will not only have to prove her innocence, but also identify and denounce those in authority who have allowed the vulnerable, like herself, to suffer abuse and violence. And, on her own, she will plot revenge—against the man who tried to kill her, and the corrupt government institutions that very nearly destroyed her life.

Once upon a time, she was a victim. Now Salander is fighting back.

I also see the rest of the series in my TBR and I actually bought the set a while back with the intention of reading it. When... is just the issue here.

A Game of Thrones by George R.R. Martin

Long ago, in a time forgotten, a preternatural event threw the seasons out of balance. In a land where summers can last decades and winters a lifetime, trouble is brewing. The cold is returning, and in the frozen wastes to the north of Winterfell, sinister and supernatural forces are massing beyond the kingdom's protective Wall. At the center of the conflict lie the Starks of Winterfell, a family as harsh and unyielding as the land they were born to. Sweeping from a land of brutal cold to a distant summertime kingdom of epicurean plenty, here is a tale of lords and ladies, soldiers and sorcerers, assassins and bastards, who come together in a time of grim omens.
Here an enigmatic band of warriors bear swords of no human metal; a tribe of fierce wildlings carry men off into madness; a cruel young dragon prince barters his sister to win back his throne; and a determined woman undertakes the most treacherous of journeys. Amid plots and counter-plots, tragedy and betrayal, victory and terror, the fate of the Starks, their allies, and their enemies hangs perilously in the balance, as each endeavors to win that deadliest of conflicts: the game of thrones.

A little ambivalent about this. It was never high on my to-read list, but you know, it's one of the "big names." Kinda.

Water for Elephants by Sara Gruen

Beautifully written, Water for Elephants is illuminated by a wonderful sense of time and place. It tells a story of a love between two people that overcomes incredible odds in a world in which even love is a luxury that few can afford.

This got on my list because of the nanowrimo thing. Without that link, I don't know if it will really pique my interest.

AAANNNDDD my TBR is still at 441. LOL