Rethinking my approach to #bookreviews and star ratings

I blogged about blogging more and then dropped off the grid. haha.

Well, Tuesday I did blog, but over at Teaspoon Publishing. And then classes started again yesterday. I was still hoping to finish my review of New Suns by then, but we hung out after class, and then I dropped by the department's New Year thing, and then I procrastinated dinner, and by the time I actually finished reading the book, it was almost midnight and I was falling asleep. I'm not usually that last minute in reviewing books, though. I was originally planning to review another book this week, but when I finished it, I hated it, and after much thinking, I decided I was not going to expend any more energy on it by writing a review.

I've been thinking about book reviews and star ratings ever since the last SRFC. Someone mentioned something along the lines of how authors shouldn't give a book anything less than 5/5 stars because doing that is pulling their ratings down and being mean to our colleagues. This reminds me now of the stupid kerfuffle that stopped us doing readings at The Constant Gardener (yes, there was a reason we moved), but my immediate reaction was actually well, in Corporate, we rate our colleagues ALL THE TIME. That's why we have 360-degree reviews (we review our juniors, peers AND managers). But thinking it over, we don't rate them in public and no one else knows what we wrote except us and HR, and whatever HR releases (anonymously) to the reviewee. So yeah, maybe there is a difference.

Sidetrack about performance reviews: I used to be super stressed about how to rate people's work, especially those looking for job confirmation, until one of my managers simplified it for me. She asked (I'm paraphrasing, I don't have perfect recall), "well, would you like this person assigned to your team for your next job (project)? If your answer is an immediate no... then you know what to do." Because if it's a matter of personality clash, you're more likely to go ah, well, maybe, we'll see but if it's a matter of that person is so incompetent you just want to stab him/her, it'll be an automatic omg noooo go awayyyy *throws garlic, salt, holy water, whatever is on hand*. That's me anyway.

But back to book reviews, this person's rationale was that as an author yourself, you would have a following who would probably put more weight on your rating and review than they would on others. Which makes sense.

On the other hand, this fallacy in thinking that only a 5-star book is a good book is... silly. The real world doesn't work that way. A 4-star review is still a good review. Heck, a 1-star review with a carefully thought out reason could also end up being good endorsement for a book because hate reads are a thing. Everyone who reviews and reads reviews knows that no one can 5-star everything. That either means that you're overly generous, you don't want to hurt/offend people, or you're not really a good judge of what you're reviewing.

As a reader, the thing that interests me first is the story description anyway, and I'll only turn down a book based on star ratings if it's less than 2.5... kind of like the passing GPA. LOL. That's usually also a budget thing. Because I buy too many books.

So I dunno. I'm rethinking the way I review and rate books. The big review sites usually have a starred review (Fellowship of Fantasy does a "knighted" review) for the really really good books but no star ratings for anything else, and I might swing that way. The stats on Goodreads would look really weird, though. I usually have a range throughout the year, with most falling between 3 - 5 stars. The ones I don't end up rating are usually the ones I'm too conflicted about to even guess at a star. 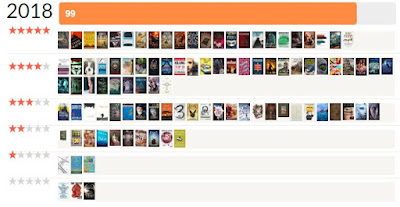 What do you think? Maintain the star ratings? Ditch them? Stop reviewing?

AM I BEING WORRIED ABOUT NOTHING?!

(I mean yes, a poor review about my books would make me sad but but it's your opinion and you're entitled to it. Does it make any difference if the review is from a writer or a non-writer because we're all in the business of talking about books anyway?)

I'm probably overthinking it by now so I'm going to go back to actually finish writing my review. HA. But please, settle my doubts.
Posted by Anna Tan at 12:59 am