Discernment by Lauren H. Salisbury
My rating: 5 of 5 stars

JIYA DOES NOT WANT TO GET MARRIED. That's it, that's the whole book.

Discernment starts with the typical "awkward girl who doesn't quite fit in" vibe. Jiya can't cook. She can't sew. She wants to watch the races, work on machines, maybe be a mechanic. But she can't. Not when her father is the Nalac-dar, leader of the clan, and has traditions and laws to uphold. And one of them is that she needs to get married and settle down pretty soon. Even though she knows there has to be something more to her life - something that matters.

But then Mahsan saves her from space pirates, and the off-worlder takes residence in her father's estate and eventually in her heart...

TBH I had a little difficulty starting this one. After the brilliant Esaralian world in Courage and Strength, you're suddenly thrown into an all-new Teraburan world with new customs and traditions and so. many. animal. names. I have to admit that I skipped some of the animal/plant descriptions, sorry.

What I especially love about this one is the nuance that Salisbury brings to Jiya's search for meaning. It's not that Jiya just wants to buck traditions for the sake of rebellion. She tries. But it's not enough. Why did the All-seeing One give her gifts and interests that don't fit any of their traditions? That refuses to conform to the mould? Did God make her wrong? Was she a mistake? Were all her dreams just that - dreams? To be simply discarded so that she can cook and clean and raise children for someone who won't appreciate her true gifts?

I think these are timely, relevant questions to be asking in this day and age - young women have many new opportunities now, but traditions (especially church ones!) are holding them to the same old expectations. How do you use your gifts if your community won't let you just because of your gender? What then, is the point of having that gift?

Obviously, since this is fiction instead of real life, it all ties in very neatly.

But it should, too, in real life. 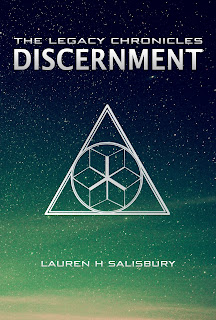 A misfit, a fugitive, and a sacred destiny. Everything changes when all three collide.
In Jiya’s world, the only choice a woman has is who she will marry. When she meets a mysterious off-worlder, she must decide how far she is willing to push the boundaries of Teraburan culture to gain her freedom, and whether that is truly what she wants.

Mahsan has never been accepted for who he is. The sole human raised on an Esarelian cruiser, his attempts to belong led only to disaster and him becoming a fugitive. When he is invited into the home of a Teraburan clan leader, he finds a place where he could finally put down roots. But his past haunts him, and he will need to make peace with it if he wants any kind of future in his new home.

Not everyone approves of Jiya and Mahsan’s friendship, and some will stop at nothing to keep them apart. As the unlikely pair discover their true calling, they will have to confront everything they thought they knew and learn to see themselves as they never have before.

---
Lauren H Salisbury hates writing bios. She tried to bribe her husband to write this for her, but he refused, even for homemade banana cake. Unfortunately, she’s run out of plausible housework excuses, and she’s still waiting for the next series of The Expanse. Oh, most of her writing is sci-fi and fantasy set in the universe of her Legacy Chronicles series.
Website | Facebook | Twitter | Instagram
Discernment Giveaway Word: 2. the
a Rafflecopter giveaway
Posted by Anna Tan at 9:30 am