Over the years, I have become particularly fond of the saying, “You can lead a horse to water, but you can’t make it drink.” Not only does it blend in well with the Old West motif of Arizona (where I live), but the words are useful in reminding me of my limitations as a psychotherapist. On an even more fundamental level, this truism reminds me that true power for change always lies within the horse. To simplify the point: everyone has the ability to choose.

This idea was driven home to me when I studied the philosophical psychology of Victor E Frankl. He wrote Man’s Search for Meaning in 1946, after surviving the horrors of Auschwitz. It was his observation that prisoners who held onto some meaning of life would survive much longer than those who had not found an answer to the question, “Why am I here?” He later developed this epiphany into a psychotherapeutic approach called logotherapy. However, what impacted me most profoundly was the fact that even in such an utterly forlorn environment where life and death daily danced on the razor's edge, people could make choices.

This realization informed the development of a central theme for Joshua (central character in my Driven to the Hilt series) - that he has choices before him. Even when events outside his control seem to have stripped away almost all of his options, he can still trust others, much to his mother’s amazement. After his father is killed, he and his mother are subjected to societal scorn, gradually forced to more and more destitute areas of New Cincinnati, until they are literally living next to The Swamp, but they chose to cherish each other. They also have hope, striving to save enough to start a restaurant, and this external goal is the meaning that keeps their lives going despite their circumstances. Both Joshua and his mother chose to draw strength from the motto of his father’s Space Merchant Marine Unit - Resolute.

The threads of this theme are also woven into the story after Joshua is on his own and must choose for himself. But that is not strictly true, since his choices are informed by what he has been taught by his parents. For example, his mother assigns Joshua an essay on the Machiavellian concept, the ends justify the means. This may seem too cerebral for an 11-year-old child, but Rachel expected much from her students and even more from her son. The level of this assignment was intended to be an indirect reference to Joshua’s intellectual capacity, but it also lays a foundation for future choices, one of which will cause Joshua a great deal of pain.

As smart as Joshua is, he is also young and alone when he sees no choice but to eliminate Uncle William. True, he has firsthand evidence that Uncle William cannot be bought off or otherwise negotiated with, that the man holds dear the thought of retribution upon the boy who scarred his face. Also, he is alone and with limited resources. But is he really? He had been resourceful enough to survive The Swamp, one might claim, thrive in the deadly environment. At least Joshua will wonder about this and long second guess whether he really had no other choices.

Ah, there we are again. Choices. He made a clear choice with Uncle William. But when later faced with the choice of stabbing Blondie in the back, he refrained. Even though the Bloodstar gangster was a more immediate threat to his life. His prior choice with Uncle William informed his later choice with Blondie. And finally, while he reconciled himself to death at the end of the chase by Fenster, Joshua did not surrender. He chose to remain Resolute.

So, the next time you are led to water, be sure to weigh all the relevant information, but whatever you decide, make it a mindful choice.

About DG Lamb:
D G Lamb is a board certified clinical neuropsychologist. His day job involves helping people to become more independent after some type of neurological injury. In addition to a doctorate in Clinical Psychology, he has a Master’s in Art Therapy. He has also worked with law enforcement officers to deal with PTSD after critical incidents. While recovering from prostate cancer surgery, his son suggested he try his hand at creative writing. Although his professional experiences certainly informed aspects of this story, he also drew upon his love of cooking and backpacking the mountain trails of Arizona (where unlike Cypress Grove, it rarely rains). 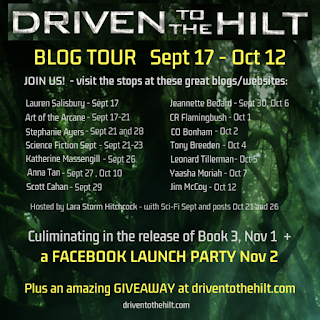 Check out DG Lamb's website (or click the picture above) for more information on the blog tour plus giveaway!

Driven to the Hilt: The Deepest Cut 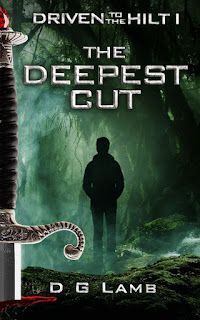 Young Joshua finds himself trapped outside the mining colony on the planet Cypress Grove. He faces a dark rainforest infested with a creature so deadly, it has kept all humans confined to their only settlement for decades. If he can manage to survive there, he will then have to brave the even darker dangers of the colony’s criminal
underworld.

It’s a fight for survival, a premature coming of age in an environment demanding resiliency, inventiveness, and self-reliance. But when teetering on the sharp edge of stark choices, can Joshua afford to consider right and wrong, or does expediency rule the day?

Driven to the Hilt: Forging the Blade 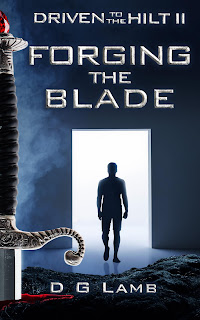 An inscrutable stranger offers him a deal that seems too good to be true. And it is. Joshua soon faces new challenges to survive in a place he had not believed was even real.

Having successfully evaded the colony’s underworld and corrupt police, Joshua finds himself trapped alone in a sterile white room. But it is no ordinary room, changing and shifting in response to his reactions and behaviors. Ultimately, he will have to make a choice… one that will forever change the direction of his life.

DG Lamb creates a dynamic world full of new challenges and lessons for an endearing young hero. Lamb’s extensive experience as a clinical neuropsychologist and his understanding of posttraumatic stress symptoms injects psychological authenticity and complexity into Joshua and a host of engaging new characters.