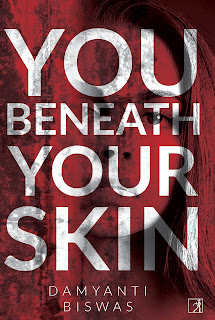 Today I have the honour and privilege of introducing Damyanti Biswas' new book, You Beneath Your Skin!

Damyanti has been a great writer friend ever since I started talking about this writing thing online, so I'm really excited that her book is hitting the shelves today!

You Beneath Your Skin is a crime novel about the investigation of an acid attack on a woman from Delhi’s upper class, set against the backdrop of crimes against underprivileged women. They are assaulted, disfigured with acid, and murdered.

While the framework is that of a thriller, the novel threads together different narrative strands. The author tackles various social issues: crimes against women and why they occur, the nexus between political corruption, police and big money; the abuse of the underprivileged, be it adults or children.

Of these the issue of crimes against women is the strongest—why do men attack women? Why do they gang together? What happens when a woman tries to break the glass ceiling? Can toxic masculinity masquerade as benevolent patriarchy?

Parents would also find this novel fascinating: how do you bring up a good human being in today’s troubled times? How much do you know of your teenager’s life? If you’re the parent of a special child, what challenges do you face and what sort of support can you expect?

It is a whodunnit, but also a whydunnit, because violent crime unravels those affected: the people, the relationships, the very fabric of society, and we get a glimpse of what lies beneath. That’s why the title, You Beneath Your Skin.

The narrative of the book was researched and shaped during the author’s work with Project WHY, and some of the experiences generously shared by acid attack survivors from the non-profit Stop Acid Attacks. To return this debt of gratitude, all author proceeds from the book will go to these two non-profits. 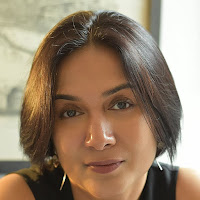 Damyanti Biswas lives in Singapore, and works with Delhi's underprivileged children as part of Project Why, a charity that promotes education and social enhancement in underprivileged communities. Her short stories have been published in magazines in the US, UK, and Asia, and she helps edit the Forge Literary Magazine. You can find her on her blog and twitter.

All the author proceeds will go to Project WHY and Stop Acid Attacks.


Here's a preview of Chapter One!