Since I've got a hefty TBR and Matt over at Runalong the Shelves is doing a TBR reduction challenge, I figured why not?

Because many of my books are still in boxes after the moves (in 2019 and 2020, ha!!), I'm restricting the books even further to the current 3 open boxes and 1 shelf of unread books, plus unread ebooks on my Kindle.

The idea is that once I clear these boxes and the shelf, I can move on to the next unopened box. And work from there until there are no more boxes clogging up my office. (Will that actually happen??? Probably not in the next year or so). 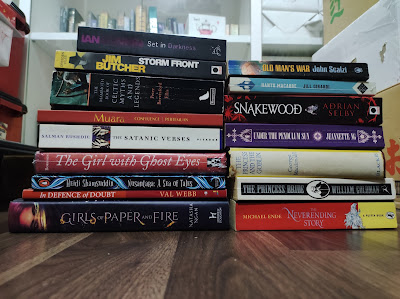 So, here are the books I've lined up so far. I may not end up doing the stretch goals because I DO also have e-ARCS to review and I try not to post more than 4 reviews a month. I also don't think I have the time to read more than that.

I'll be linking the books to their Goodreads page here first, and then updating the links to my review post once I've read them.

I'll probably update the list further on in the year if I decide that something else in the box/kindle fits better. Or if I cave and open another TBR box.