In lieu of a #fridayflash post, I shall regale you with the adventures of Anna in Singapore!

Thursday started off with a bit of a mad rush to the airport because of the early morning jam. Eeks. The flight was smooth - in fact, we landed early, and I spent the two-ish hours waiting for Edrian's flight from KL to arrive re-reading KaSonndra's book When Copper Suns Fall so that I could finally get round to writing the review (which, incidentally is finally up here).

Edrian took about an hour to get out of the airport and clear immigration, so I was kind of glad that I decided on the peach tart and iced chocolate I had earlier. Hopped on the bus to Terminal 2 then caught the MRT into town and got distracted fiddling around with bluetooth keyboards so much so that we totally missed the announcement that we were supposed to switch trains at the Tanah Merah station. We only realised this when I heard an announcement saying "Next station - Changi Airport". The conductor comes out from the end of the train and looks at us funny because everyone else has disembarked so we asked if we were actually supposed to change at Tanah Merah, to which he confirms yes, we were. So that was half an hour wasted going up and down the tracks: Stupid transport moment #1. The rest of the trip to Yong May's apartment on Depot Road was pretty uneventful, thanks to the very awesomely detailed instructions she e-mailed us on how to get there.

Cassandra, whom I met in Project Dance, graciously picked us up from there via taxi where she and her friend Michelle treated us to a lovely dinner and desserts at Raffles City. Thank you, girls!
Then we took the MRT down to the main reason we were in Singapore!

For which I took crappy photos in the beginning, just for the heck of it. 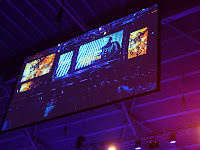 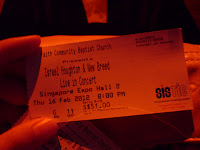 I pretty much enjoyed it, until Edrian and the oh-so-musical-guys started bitching at the end about how the sound wasn't that great, and all they did was what they already they did in youtube, and how the musicians weren't the good ones they saw on youtube and were probably team B, and how Israel doesn't really connect with the crowd, etc. I mean, the only gripe I had before that was that I couldn't really hear the backing vocals, which I was keen on catching because ohgoshtheyalwayshavesuchintricateharmonies. Urgh. But you know how negative comments just stick? Okay, gripe number 2 would probably be that the expo hall was flat, so I couldn't see anything much anyways, but at any rate, I went there with the intention that it would be a great worship concert and if it's a worship concert, well it doesn't matter if you can't see the singers. Mini epiphany (not really) on the fact that I'm beginning to depend too much on hype, especially in worship, to be able to worship, and how I should really be concentrating on that still small voice, but that's a post for another day.
Followed the Metro Tabernacle people for frog porridge at Geylang after that, which was pretty yummy, though I was dead tired. On the taxi ride back, Edrian fell asleep and I was zoning out a little, which resulted in the taxi stopping a little further than he should have, so we had to walk. A bit. More.

So I get annoyed with people who say they'll do one thing but then don't, so Friday started with a bit of a what-the-heck moment because Edrian's friend who was supposed to pick us up, forgot. This led to Stupid transport moment #2, where he misread the bus number, leading to us miscounting the number of stops, so we got down from bus 195 at some random bus stop and wondered where the Tiong Bahru Market is. We asked a random passerby how long it took to walk to the market, whereby he gave us a funny look (again!) and said that it's really far, at least 4 bus stops away. So we waited for the next bus. And it really was quite far away.
At any rate, we managed to have breakfast, and then the guys were all agog about going to this here place: 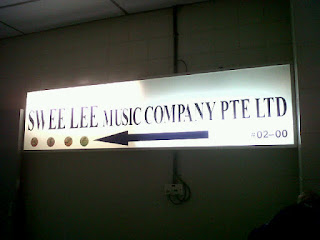 Which was a bit of heaven for them, but pretty boring for me after awhile, because they spent THREE HOURS deciding on what bass guitar to buy. It was a Hartke. For SGD730, or thereabouts. 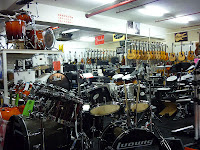 Got stopped after two quick shots because apparently we can't take pictures. Meh.
Hopped to Suntech City Mall after that for lunch and a bit of a walk around before I went off and left the guys behind to meet Anne in Bugis.
We caught a shot of the 3D art thing (which wasn't half as impressive as I thought it would be) and I got tricked into thinking that the Shaw Theatre in this artsy-fartsy place would be an actual theatre instead of a movie theatre. Ah, wishful thinking.
Accidentally bumped into Shari and Jim at Singapore Plaza (I think that's what it's called? Or Plaza Singapore?) which was pretty good because I didn't get to meet them otherwise. =(
Actually managed to catch 3/4 of the Hwa siblings in Singapore too! I think it's the first time I've met all of them in the same place, excepting Yue-Yi who's in the UK, but then again I meet her more often than the others. Err actually, I think except for Wei-An who was in Project Dance for 3 days I probably met Hui-En only once, and I'm not sure if I did (or did not) actually ever meet Shi-Hsia in real life. Maybe at a NSCF camp, but I'm not sure.