This is a filler post, with writing, blood, food and music

It's been a crazy January and first week of February, with lotsa work deadlines, Chinese New Year and then the manic I-must-finish-this-script session. So this is what's been happening the since... since the last time I actually blog-blogged.

Update #1:
I FINISHED THE SCRIPT! YAY!
I totally hate the ending. Boo.
But I kinda like the emo bits. Haha.
It's out with a few dramatic friends (lol) to critique so that they can tell me that it really sucks (I know that already) and the rest of the team so that they can figure out how to make it work better. And we're also waiting on our song writer to finish the songs *hint AGAIN*. So I'm putting it aside for the moment to concentrate on the book reviews I've been supposed to write. Supposing I do have the time in between the backlog at work, trying to write, trying to sleep, trying to stay sane and all that.

Update #2:
Just for the heck of it, THESE ARE MY KNEES:


Because silly old me can't walk straight. You may now commisserate with me or just laugh your head off. That's what everyone in the parking lot did anyway.

Update #3:
I went on a food trip! Sorta.
Okay, first off, I'm not much of a foodie. I don't take like a gazillion pictures of the food I'm about to eat or discuss the taste, presentation and what-nots of food. I mean, food is food, is food. You eat it. You like it or you don't. I don't drive to the next state just to eat food that I can get down the road, even if it's so much nicer in the next state. You get the drift.
At any rate, I was feeling bored and a little restless and I had finished up most of the script on Monday and was left with the last two scenes so I decided to follow the guys on their little Pulau Aman* excursion for seafood on Tuesday.
Surprisingly there was very little traffic heading out of Tanjung Bunga** to the Penang Bridge and out of the island as well despite it being Thaipusm (yay!). We cut out from the highway at Tambun, discussed the merits of the Claypot Crabs at Cai Xiang and set off to find the Pulau Aman jetty via some unknown-brand GPS. We found ourselves heading uphill via a very tiny track and figured something must be wrong before realising that we were actually heading up to a Celcom signal tower. Like, what?
Anyway, retracing our route, we saw finally saw a sign pointing us to the jetty. We took a short boat ride (abt 5 mins) over to the island. 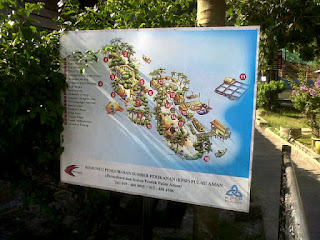 The main point of this trip?


Okay, so it looks pretty gross this way, but it was delish! You take the scissors to cut off the butt (and for me, the head, cos it looks gross - the guys ate the heads!) and slit it along the side so you can pull off the shell and eat the lovely steamed meat inside. These are mantis prawns, by the way, just so you know. Oh and if you're looking for prices, these were mid-sized ones sold at RM40/kg. We picked 10 prawns*** which came up to RM48, and RM4 charge for steaming.
We had mee udang**** too, but it was nothing spectacular.
More pictures by Yuen Thern on FB. But I don't know if his album is public.

Okay, it's past bedtime. I think you can tell.