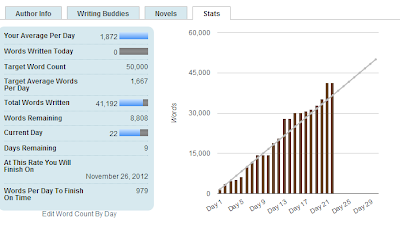 So I haven't been updating you on my progress for a while.
I've been busy writing. Progress looks good to finish nanowrimo on time this year, though I have a feeling that the story may be longer than 50K words this round. I feel as if I've been jumping from perspective to perspective for some odd reason, but it helps me to figure out what's going on in this story. Sorry, I'm still pantsing it. I should actually go and work on plot, since I'm so bad at it, but I figure I'll work it out AFTER November.

What has really been helping me this year is joining word sprints on the NaNoWriMo group on facebook. What we do is we set a starting time (say :00) and a length (for 20 [mins]), and at the end of the period we check in to see how each of us does. I've figured that my most efficient writing sprint is 20 minutes. I average 700-odd words at 20 minutes, which is interesting seeing that I usually only manage about 400 odd words in 15 minutes. Productivity drops after that, with about 800 - 900 words in 30 minutes. On a good day, I manage 1K words in 30 minutes.


The Nameless One floated in the darkness of the abyss, nameless, faceless, formless. It felt the straining of its power against the bonds that held him. A soft creak, like rope being stretched too far, sounded somewhere near the boundary. The magic that held him was growing weaker by the day. If it had a face, he would have grinned like a very sinister Cheshire Cat. As it was, a feeling of smugness pervaded the abyss under Pieterose.
"Listen to me," it whispered into the willing ear, bent to his will. "The boy will seek to overpower you. And while he does that, who knows what will happen to Kayner? Evil is closing in on you at Charoite from Under Pieterose, and you will not be caught napping. No, no matter what everyone says, it is best to head off evil from the very beginning."
In a distant place, the listener nodded at its wise words. The boy was unimportant. The duel was unimportant. Winning this war with the Unmentionables was of paramount interest to Kayner at the moment.
"It is breaking out, Erel, and only you can stop it. Only you have the power and the might as well as the right to do it. No one else," the Nameless One continued, sending a sense of urgency to its listener. "You must do something. Only you see the danger. Everyone is so blind!"
The Nameless One chuckled silently to himself. How unaware this old man was! How unconsciously he absorbed everything that the Nameless One whispered to the black recesses of his heart. Oh, if only the Sub Authoruss knew who was really talking to him. Did he really think that it was the voice of the elusive Book? The Book was not in Charoite, the Nameless One knew, though the Sub Authoruss went blindly about the castle looking for it. It could feel the absence of the Book's power on the Seat of Charoite, though it was still somewhere in Kayner. That absence of power was what gave it the strength to push against its boundaries, pushing out until it could project its voice into the very void.
Soon, when the Sub Authoruss was within reach, the Nameless One would be able to draw on his magic and strength, like a leech. And then Kayner would be his. If it could laugh, it would have laughed, with evil maniacal guffaws, but as it was, a feeling of mirth spread through the abyss. Time. Time was on its side now.
Other things floated in the abyss with it, but the Nameless One ignored them. They were small and powerless against it; broken spirits, Fay, Gnome and human, of those who had tried and failed to usurp the power of the Authorusses. But it was different. The Nameless One searched the countless memories it held within itself, searching through the many faces it had once held. It was one, but many. It was legion. It would soon rule Kayner.


On other matters, I attended my first write-in with Patricia at Starbucks NWP last Saturday. It was a nice time discussing our WIP (mine is so plot-holed, argh!) and doing a little writing (but not that much). May possibly meet up with Rabia at this week's George Town Literary Festival so I need to hurry up and do more writing because I won't be free this weekend. Also I met Gina Yap, a writer with Buku Fixi who's going to launch her novel this weekend at the Fest! 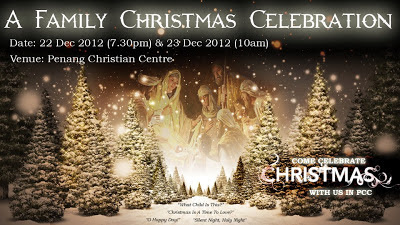