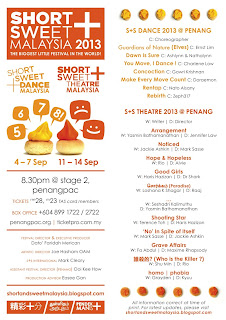 I'd wanted to write this the night before, right after watching the show, but I was tired, and then I was lazy. So anyway, there's still one more run Saturday night (not sure if they have a matinee? There might be) so I figured I might as well just do the review now, in case there's anyone who's still figuring out whether or not to catch the final show.

Okay. So mini introduction - short and sweet theatre is a showcase of 10-minute plays. Plays will be judged for a variety of things (doesn't make a difference unless you are a participant or a judge), as well as the Audience Choice Awards (okay, this one involves you, the audience. You get to vote for your favourite).

As a mini rundown goes, I think this year's offerings were slightly better than last year's. Most of the plays were local - only two from KL - as compared to last year, whereby some plays were recycled from previous fests.

Thoughts about the plays

The show started off with Arrangement, which kind of bombed for me because it didn't quite make sense. A wife comes home from a trip to find her husband masturbating (?) goes into a spiel about being perfectly fine and understanding if he needs to have another woman (went on too long about this, in CIRCLES) and then discovers that after two months of marriage, he is still a virgin. Er. Unless I understood the whole thing wrong. (Sorry if this is a spoiler, but if you understand it any better, please do let me know). *scratch head*
It would have been much better if 1) the extreme vulgarity was dropped (the actors didn't seem comfortable with it anyway) as the subject matter was shocking enough at any rate 2) the acting was much more flamboyant (and the English better/more fluent), thereby carrying off the pseudo-American patter it was written in.

This was followed by Noticed, which was a sweet little piece about teenagers and self-image, and how things are supposed to change in college, but doesn't really, not unless you do something about it yourself. On one hand, you have a teen (sorry, I forgot her name) who, tired of being the wallflower, is on an extreme diet (i.e. I AM NOT EATING). Her friend, the popular one, is worried about her. I loved the argument about why, if losing weight and gaining popularity was supposed to make you happy, you don't actually seem happy? As much as I liked this piece (and it was quite well written by my friend Jackie) there wasn't anything spectacularly new or exceptional about this.

I didn't really follow Hope and hopeless as it was in Mandarin, but you know what, it was BRILLIANT. Sounds strange, right? But that shows you what good acting really is - it draws you in, entrances you, makes you laugh and react - even if it's mainly to the body language and about 10% (err, or less) of what they said. It had something to do with heaven and hell...

Good girls turned semi-serious, talking about abusive husbands and arranged marriages, whilst "..." was a classic lost in translation/miscommunication story between a frantic husband (I think he was supposed to be Indian, but the actor was Chinese) and his visiting Japanese mother-in-law though it was a rather Malaysian interpretation of what a Japanese old woman would be, which I think made her look like a rather frazzled, befuddled aunty lost in her own world, rather than one who had communication problems. (Okay, that sentence was way too long).

The sixth play was Shooting Star, where Rachel recalls why wishing on shooting stars makes her feel sad and why she will never wish on one again. I really liked the actors on this one. They had this nice shy/awkward vibe going on (you know, he likes her, she's oblivious, he doesn't know how to tell her, she's talking about another guy) that makes me go awww.

Okay, so 'No' in spite of itself was a brilliantly written piece. Do you realise how many nuances there can be just for that one word - "no"? Okay, so slightly same premise with the love triangle thing, but I like the way it played out. Touched a bit on suicide. Also, actor (from last year's S+S) did much better this round - maybe he suited this character better, or maybe he improved a lot.

Grave affairs was another serious piece - also bringing up the issue of abusive husbands (why are all the serious pieces about abusive husbands?) and male chauvinistic thinking. I preferred this one though, because it was serious and intended to be serious. Good girls had that psychotic/hysteria vibe to it which tends to take away from the issue. In Grave affairs, the widow stands up and gives an eulogy about why she won't be grieving for her husband's death. Her son's attempts to shut her up gives even more gravity to the issue.

Who is the killer? was another Mandarin piece, so it lost me a little. It was something about H1N1, some other pandemic (also spread by mosquitoes, I think and has R?N? or maybe N?R? code, I forget) and Char Koay Teow and I think the case was about who killed more? Or who killed someone? Er. Of course you had to have the Chinese Judge. Oh, and iPad photos. A little more slapstick humour to this one.

The last play of all, homo | phobia, was the shocker of the evening. I mean, I don't even know how to start talking about this one. Okay, I had a sneaky suspicion it was going to go the way it was going, but I didn't quite expect them to end that way. (Haha! No spoilers until after the final show!) It was, of course, about the gays and homophobia. Gay guy (shown obviously by his erm. tight, colourful shirt and short shorts and GLITTERY EYELASHES OH MY GOODNESS THE GLITTERY EYELASHES*) comes to borrow notes from a classmate. Classmate acts decidedly uncomfortable around him and gets accused of being homophobic.

Other random thoughts
1. Okay, so why is it that the two plays about abuse was written by Malays (Haris Hazizan and Fa Abdul)? Is this a common problem in Malay households? Or is it a bigger/weightier problem/issue for them? Good Girls was a definitely Malay setting, though Grave Affairs was rather confused - the son was wearing a cross, there was an obvious "Christian wake" kind of setting with eulogy time, but the widow later smears red paint on her forehead which is a Hindu practice? (Intentional, I'm thinking - kind of I'm not just renouncing you as my husband, I'm renouncing your religion too!)

3. LANGUAGE! It makes such a big difference - not the language itself, but how well you speak it, or how comfortable you are speaking it. It really affects your acting. I don't doubt that the two actors in Arrangement were okay with speaking English, but you could tell it wasn't fluent, maybe not quite their first language. And I think that was the deciding factor in what broke the play (for me at least) - there was no impact to what they were saying at all. This was all the more evident because right after that, Noticed, was played by two girls (one Caucasian, one maybe mixed? - or at least from an international school) who were decidedly fluent and it made everything they did and said feel more natural. Of course, as I said about Hope and Hopeless, and which also applies to Who is the Killer?, even though I didn't understand the actual dialogue, it still captured my attention because it felt real.
Posted by Anna Tan at 1:50 am