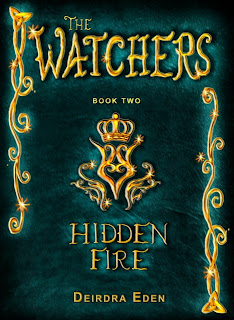 Finding your own unique strength and courage is a major theme of The Watchers. The characters in this series are as diverse as they come: different nationalities, male, female, dwarf, human, dragon, pixie, noble, peasant orphan, young, aged. Yet, no matter the situation, whether tragic or triumphant, they find ways to grow and develop into something stronger.

The main character, Auriella (Aura), is born and lives in a society and time when girls, especially of her social status, didn't have opportunities for education or growth, let alone a chance to be a hero. The Watchers must learn to work together, despite differences, to defeat Erebus and the Shadow Legion, just as we, no matter our gender, race, age, circumstances, etc., are capable of great things.

Strong men and women grow in all situations and become heroes when one is needed. They don't think about it, they just do what's right.
-Deirdra Eden, author of The Watchers Series

Book Summary
Auriella’s new life as a royal protector is in shambles. The new king ignores her warnings of a Shadow Legion invasion and he is determined to marry her off. Ghosts from her past, the discovery of other Watchers, and a handsome Scottish warrior throw her off guard and weaken her emotional defenses. Caught in a web of secrecy and betrayal, Auriella struggles to control and protect the devastating power of Starfire. A terrible truth and a fateful choice will lead her to her destiny as the fabled Lady of Neviah, or could shroud the entire world in eternal darkness.

Filled with action, romance, drama, and comedy, Hidden Fire is an addicting read that you won't want to put down.

“Deirdra Eden has surpassed her earlier achievement in this daring tale of struggle between good and evil forces that exist in every universe.” Mark F. Cheney, author of MARK OF THE JAGUAR

“Thought provoking and full of action, I didn’t want to put the book down! I really loved the symbolism and it was a fantastic read.” Mary G. – age 15

a Rafflecopter giveaway
Posted by Anna Tan at 10:48 pm