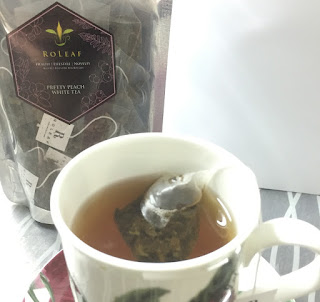 I was pretty excited that I received the Pretty Peach White Tea because I love peach tea and had wanted to try it for a while now. There was this really lovely aroma that I just had to sit and bask in for a while when I opened the bag.

Anna's review: Okay, I'm probably biased already because it's peach tea, which is one of my all-time favourites. It's sweet enough to drink without sugar, though I personally feel that a teaspoon of sugar does help enhance the taste. However, because it's a white tea, it feels lighter in comparison to most other peach teas I have tried which use black tea.

How I would describe it to my mum: Uh, it's a fruit tea. No, it's NOT like iced peach tea that's made from the sachets and has too much sugar.

My stash of teas for review also included Peach Green Sencha, which I have tried before. I remembered not really liking it because the green tea was often slightly bitter and too overpowering, but I decided to try it again anyway. Being smarter this time, I googled up the product page to check on brewing suggestions. Take note that the suggested brewing temperature for this is only 80° C. This is actually the same as for the other peach tea above, but the big difference is this: GREEN TEA TASTES TERRIBLE WHEN IT'S OVERCOOKED. Well, at least, to me.

Anna's review: Now that I allowed the water to cool a little before steeping the tea, the peach and the green tea taste seemed to balance out. The green tea was not too overpowering, allowing the sweetness of the peach to come as a nice after taste. I'll probably not be too crazy about it because green teas have never been a personal favourite, but it's not bad after all.

How I would describe it to my mum: A light green tea mixed with peach tea (again, not the super sweet iced one). I'm not very good at this, am I?