A couple of weeks ago, I received a batch teas for review from the RoLeaf.

Now that's kind of a lot to review at one go!

I'm an avid tea drinker but this is the first time I'm actually going to write reviews (What do I say? How do I describe them?) so I'm just going to put down my thoughts about the tea.
I'm also adding a section called "How I would describe this to my mum" where I compare the tea to more common teas (because she always asks "what does it taste like?")

Here's my review of the first 3 teas that I sampled at random: 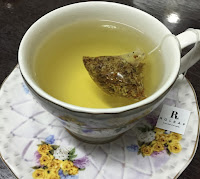 I started off with the Osmanthus Fragrans, mainly because it smelled really nice. And because I was feeling fancy that night, I decided to make it in a fancy cup and take a photo. (I normally just use ginormous mugs, but figured that this one needed some special treatment.)

Anna's review: This is a very beautiful, light, flowery tea, naturally sweet to the taste. And yes, I drank it at night. It's an herbal tea so it probably doesn't have any caffeine, I think, not that it would personally affect me. I'm not a big herbal person, but I kinda liked it.

The next tea I chose was Choju Hojicha, mainly because I wanted something light and this one didn't have a very strong smell.

Anna's review: It put me in mind of roasted rice/nuts and I thought it might have been a Korean tea, but when I looked it up, it's actually a Japanese roasted green tea. (I apparently can't tell from the name. Haha!) I would definitely buy this if I were looking for something in the Oriental/Chinese-type tea range.

How I would describe it to my mum: Like the watery free flow tea they served in that Korean shop in Prima Tanjung (that's now closed down), only thicker and "roasty-er" tasting.

The last one I picked for this review was Chava Chai. I'm normally wary of chai, because it uses a lot of spices that I hate so I really wasn't sure if I wanted to drink this. Then again, it smelled okay (as you can tell, I go by smell a lot when it comes to tea).

Anna's review: I found it to be a thick and rich black tea, but surprisingly neutral (i.e. no overwhelming spice taste). I initially thought I might have over-brewed it because it was thick and bitter-ish, but I checked the brewing time and temperature of 4-5 mins and 100° C, which was kind of the range I made it at, so I suppose that's how it's supposed to taste. Tried it a second time, just in case. This time it wasn't as thick (made sure to take the tea bag out after 5 mins), but there was still a bitterish, strangish after taste that I didn't quite like. I guess this wasn't really my cup of tea.

How I would describe it to my mum: Normal black tea with a bitter taste at the end probably from the weird cinnamon, cardamom, ginger things. You might like it if you like those kind of stuff.

Check back next week for more tea reviews!
Posted by Anna Tan at 12:00 pm