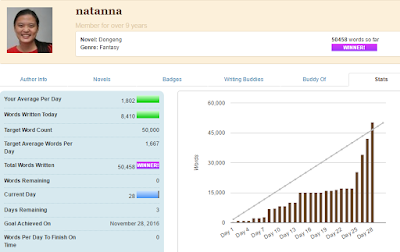 I had been a bit ambivalent about doing NaNoWriMo this year, mainly because I would be away for half the month, but I’d been encouraging a lot of people—mostly from our baby writing group—to do so and I thought I should set a good example by at least attempting it. After all, winning or losing wasn’t my main goal; my main goal was to continue to build this writing community.

I talked to our weekly write-in group as well as the NPO I work with, LUMA, and we set up the LUMA Drop-In Writing Space to host writers from 10am-10pm daily for the last 6 days of November. The dates also coincided with the annual George Town Literary Fest & In-between Arts Festival, which was focusing on food and zines, so we made a public event on Facebook and announced it in all the writers' groups we knew of online.

And then November started, and I went on my holiday, working sporadically on the new novel and totally pantsing all the way. Which was how I found myself at the start of our write-ins on 25th November with only 17K words. On one hand, I did wonder if I could actually reach 50K in such a short time, but on the other hand, I wasn’t very bothered because I knew that I had a lot of time before me and all I had to do was sit down and write, besides opening and closing the door for people (ah, the privilege of not working a 9-to-5). And so I broke a personal record and wrote an average of 8,000 words a day over the next 4 days, finishing 2 days earlier than I expected.

Now, obviously, I want to replicate this since I’m making writing my full-time job. If I know what’s been working these 4 days, that would help me to work better, right? I tracked all my writing this month (wordcounts & times) in Wordly and here’s my analysis of the data: 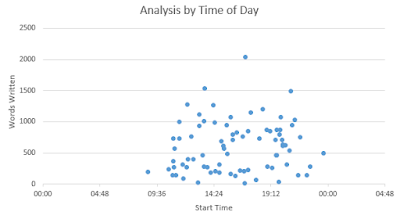 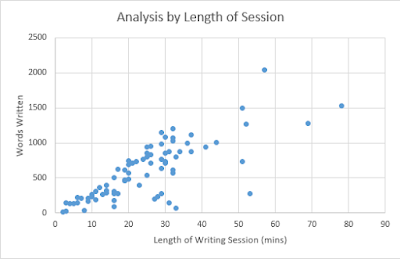 In summary, here are the things I need to be working on to make sure I’m really writing and not just being a bum:


All of which I already knew before, but now there’s DATA. Hard, measurable data.

But other than that, the writing space has also been a win community-wise. There were some down/slow times, especially in the beginning where I feared I’d be sitting there writing alone (which turned out okay because I was productive), but there’s also been a steady group of regulars, as well as a few newcomers added to our writing community. The group’s excited to take it further, so we might see more people coming for write-ins in future. And maybe more collaborations/discussions/critiques happening spontaneously.

… the only thing I am actually uber sad about is that I didn’t attend anything in GTLF at all. I’d been eyeing maybe 2 – 3 sessions, but I needed to sit in LUMA to keep the space open. Maybe next time we’ll try not to overlap with the fest. I had been hoping for some drop-ins from fest attendees, but that didn’t actually happen.
Posted by Anna Tan at 9:30 am