#GuestPost: Why I Write: Marvelous Misfits and Heroic Outcasts by Janeen Ippolito

A faithless, flirtatious man with a family he forgot. A rejected woman still bearing the shame and suspicion from abuse she suffered as a child. A refugee queen fighting for her people, even when those people rebel and undermine her in front of her host country’s leadership. An assassin from a pacifist culture who harbors an isolating secret beneath his physician exterior.

In case you can’t tell, I love my misfits and outcasts. In fact, until a main or supporting character is in some way dealing with a hard issue or a problem, I have no idea how to write them. I’m just waiting for a reader to ask “where are your happy characters already?” And possibly, “why don’t you fix everything by the end?”

But the hard, scarring truths of situations are more compelling to me, and I consider them some of the most realistic parts of my fantasy fiction. We all carry burdens and scars from our past. Because of the inherent difficulties of this world, even someone with a seemingly perfect life has undergone situations that have impacted them in ways that cannot be altered.

I know I have. My own difficulties drove me to study and understand people in order to make sense of my own life. In college, I studied anthropology, cultures, reconciliation, history. So much beauty—and so much darkness. It is so easy to get overwhelmed by the turmoil in the world. But those things are part of life, and I recast those hard realities in my fiction to hopefully build empathy and understanding. 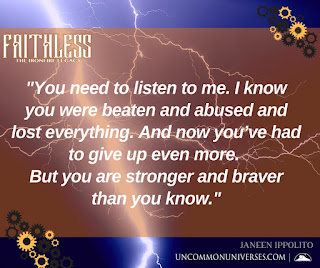 In each and every character I write, I pour hardship. And then I pour hope and humor and whistling in the darkness. Because there is beauty in facing that brokenness and choosing to love anyway.  Choosing to forgive and stand up against injustice with grace and compassion. Clinging to faith and belief even when it seems impossible.

Plus, jokes in the face of grief is one of my personal coping mechanisms. Laughing until you cry or crying until you have to laugh. Either way, humor is part of the rhythm of life and a great gift from God in the face of adversity. So I write characters who try to walk to that rhythm, who wear their scars as beauty from ashes, and who understand or come to understand that they aren’t just misfits—they are marvelous. Imperfect and marred, but beloved. There is hope in their future.

The Ironfire Legacy series seeks the balance between the tragedy and the joy, as do all of my stories. Sometimes my books drift a bit darker, sometimes they favor a lighter tone. And yes, my situations for my characters are a little larger than life, because that’s what makes fantasy fun.

But at all times, I hope readers will see in my stories and characters that no one is beyond grace—or giving grace. That even the most misfit or outcast individual is alive for a reason. And that they are marvelous. No matter what scars they carry on the surface or underneath.

Janeen Ippolito believes words transform worlds. She creates writing resources and writes steampunk fantasy. She’s also an experienced teacher, editor, author coach, and the editor in chief of Uncommon Universes Press. In her spare time, she enjoys sword-fighting, reading, food, and making brownie batter.
Two of her goals are eating fried tarantulas and traveling to Antarctica. This extroverted writer loves getting connected, so find her on Twitter, Facebook, Instagram, and at her website: janeenippolito.com

One wild night, Shance Windkeeper discovers he is married to a death unicorn.

But that’s the least of his troubles.

As an agent for the Lawless, Shance is working with dragonshifters Kesia Ironfire and Zephryn Nightstalker, trying to end the dragon-human war and the organization that masterminded it. While on a mission in the Scepter of Knowledge, the Lawless is hit with a devastating death unicorn attack.

Out of the wreckage new allies emerge: Lirome Ukerys, and his twin sister Maira, the death unicorn queen—Shance’s long-lost wife.

Recently freed from captivity, Maira is fighting to regain control of her herd. Lurien Alistil, a rogue death unicorn, has bespelled the Scepter of Knowledge and taken Maira’s son. When Kesia unexpectedly challenges Lurien to a public debate, the Lawless has a chance to break the usurper’s hold. To obtain vital information they must infiltrate her lair—and as the husband of the death unicorn queen, Shance Windkeeper is the perfect prize to go in.

But Lurien’s power is stronger and more insidious than they realize. And if the final pieces of her plan fall into place, not even Shance’s newfound Talents and knowledge will be enough to stop her.

A steampunk fantasy adventure with much intrigue, unexpected romance, sudden tragedy, and a snarky cat-dragon.