C is for Chamomile #AtoZChallenge 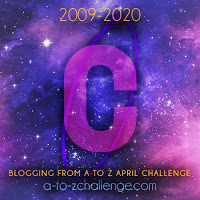 She sat, sipping slowly. The warm brew settled her stomach, taking away the queasiness that had been building up all morning. She closed her eyes and basked in the sweet smell of honey and chamomile. When she opened them, she drank deeply, set down the empty mug, and got up to get things done.

"It doesn't work that way," the healer insisted. "He's dead. You can't get anything from--"

"Just show him to me." She folded her arms on her chest and stared him down. When he didn't move, she reached out and nudged the papers she'd shown him when she entered the room.

He flipped through them again, bringing the seal on the last page right up to his nose.

"It's authentic," she said drily. "I highly doubt anyone would forge the Secretkeeper's seal just to see a dead... person."

"This is very unconventional," he protested, but he handed the papers back to her and crossed the room to where, presumably, the head was kept.

She followed close behind him. "It's not every day you find a severed head in the street."

"It was at the port," he replied, "and it was deliberately planted. By our enemies. As an act of war."

"Which makes it an even more singular event."

He opened the chest on the table and stepped aside, nearly knocking into her.

She ignored the warning, taking a deep breath while wishing for more honeyed chamomile to fortify her. Nothing. Well, she'd expected that. You'll likely find nothing, the Secretkeeper had said, but we owe it to the Sultan to at least try. She shifted her fingers downwards to close the poor man's eyes, then jerked her fingers back at the buzz. There was the faintest wisp of a memory still lingering. Amazing. He's been dead for three days. She closed her eyes and concentrated.

"Well," she said when she'd gotten all she could. "Baginda Paduka will be quite interested in that."

"What? What did you find?" The healer stared at her incredulously.

She smirked a little. "Wouldn't you like to know."

"Don't underestimate the powers of Impian's Justices," she said, leaning towards him. "Should I read your mind?"

He shrunk back, raising his arms in front of his head. "No! I haven't done anything."

"Of course you haven't." She looked back at the chest, and Amanah's head, and sighed. "Poor man." She closed the lid. "See to it that his head is returned to his family."

Mikal, Jeffett turns the Bayangan nobles against me and I am under house arrest. If he succeeds in his bid, he will do all he can to re-start the war. Suspect all missives that come under my name. Yosua.

She finished writing down the message that Amanah had held as his last thought and wondered if the man had known that she would be able to extract it. Mind-reading was such an imprecise gift and very few Justices could read from the dead, especially one that had been dead for such a length of time. Still, his name indicated that he came from Impian, which could mean that he might have more than a passing knowledge of the gift--maybe he had sisters who were gifted Justices themselves.

She sent off her findings with the messenger who had been waiting, made herself another cup of honeyed chamomile, then curled up on her bed. She took a deep draught as she dropped the mental walls she'd erected in the morning.

Grief crashed over her as Jujur finally mourned her dead brother for the first time today.

Okay, I opened the dictionary at random and picked the word Chamomile. Which led to this unexpected story that's somehow tied in to the WIP I'm working on right now. I don't know if it will actually happen in the story, but eh.
Posted by Anna Tan at 9:30 am