H is for Hands #AtoZChallenge 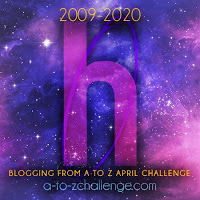 "They're your children. You can't just wash your hands of them," a voice spoke from the darkness.

Iman froze. She spun around, searching the dimly lit room.

Rahsia rose from the couch, rubbing at her eyes as she yawned.

"What are you still doing here?" Iman clutched at the door frame for support.

"Making sure your two young children are fine. I couldn't leave them alone, could I? When I don't even know when you're going to get home?" Rahsia turned up the lamps, revealing dark circles around her eyes. She shuffled towards the door, stretching as she went.

Iman stood blocking the doorway. "Well, you might as well spend the night then."

"I have work tomorrow."

"No, Iman. Unlike you, I am responsible. I won't shirk my work to take care of your children."

"But Rahsia, you know what the Secretkeeper has to do. Nek herself bore this responsibility--"

"Don't bring Nek into this." It came out sharper than she intended, but Rahsia allowed herself to be a little bitter. After all, she'd been waiting, training to take over Nek's role as the Secretkeeper, only for it to somehow jump family lines to her best friend, Iman.

"You know how important this is. With the sacking of Suci and the prophecies..."

Rahsia's face didn't soften. If anything, it grew harder. "Tulen misses you. Telus is asking for his mak. Farouk can deal with Suci for one day without you. Your children must come first." They must, because she knew this feeling too well. Rahsia knew how it felt to be deserted by her parents, by the grandmother who was supposed to take care of her, but was always too busy with the Temple, always on call for everyone except her. She couldn't let her godchildren feel the same way too.

She looked so lost and exhausted that Rahsia finally relented.

"I'll come by after work. Tell Tulen that." For the children. She would do this for the children, even if their own mother abandoned them.

From Raising Cain: How the Bible Shapes the Things You Say:

Hands, Wash one's
Meaning: To end one's association with someone or something; to abandon or renounce responsibility for someone or something.
Source: Matthew 27:24; When Pilate saw that he could prevail nothing, but that rather a tumult was made, he took water, and washed his hands before the multitude, saying, I am innocent of the blood of this just person: see ye to it.

A fitting prompt, I thought, for the Holy Week even if the story doesn't quite keep the theme.

Also, remember to wash your hands!