A Castle from Ashes by Sharon Rose
My rating: 5 of 5 stars

Sir Thomas Kaituer is almost assassinated at the ruins of his family's castle. Lady Sareen visits her cousin Beth to ask for advice on how to avoid marrying Lord Ivan Maerton, where she finds herself starting to fall in love with Sir Thomas. Lord Ivan Maerton is determined to accomplish two things: destroy Kaituer and marry Lady Sareen.

Where the first two books in the Castle in the Wilde series, A Castle Awakened and A Castle Contended, focus on Tristan and Beth's story, this one focuses on Sir Thomas Kaituer. Thomas isn't a new character by any means - he's been a side character of increasing importance ever since the first one where he first stumbles upon the castle while searching for his missing brother. We've seen him grow from being an outcast living in fear for his life to being knighted by the king himself. (In fact, the recently released prequel, A Castle Lost, tells the story of the grandfather he was named after, and how that Thomas Kaituer lost his family, title, and castle all in one day; it might be helpful to read that first to see where the present Thomas is coming from and all the family baggage he is dealing with.)

A Castle from Ashes at its core is a story about integrity and (appropriate) belief in one's self. Thomas is coming into his own - yet he struggles with self-doubt and whether he is worthy of all the things that have been restored to him. It feels like everyone else around him, from the people of the woods to Tristan and the king, believes in his capabilities more than he does himself. I don't quite believe in this "noble blood" thing that makes it so that he has a right to rule because of his bloodline/ancestors, but it is evident from the way that Thomas carries himself and how he relates to others that he has great leadership qualities and a heart to help those under his care. Besides, he has a great role model-and practical help-in Tristan.

On the other hand, Ivan is so sure of his place in the realm and his utter right to everything he wants that he gets increasingly unhinged when things are denied him or events don't turn out the way he expects them to. Of course, his greatest enemy is Thomas, because how dare this little upstart outlaw claim any portion of his inheritance no matter what the law says? I kind of pity Duke Maerton because he has to deal with his son, but not really because it is somewhat his fault.

Of course, in between the clash of these two men, there has to be a woman. And Lady Sareen is stuck in a society where she has little to no say in what happens to her. But it's lovely to see how she learns to stand up for herself - and what she really wants - while maintaining appropriate boundaries.

All in all, A Castle from Ashes is an exciting read and a fitting end to the trilogy.

A Castle from Ashes releases today! Get it now :) 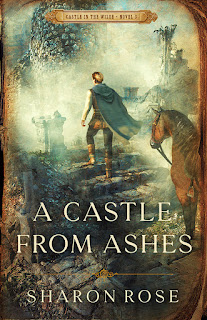 His family was abased, and their castle destroyed. Now a hint of the king’s favor marks him for murder.

Saving the king’s life has lifted Thomas Kaituer from impoverished exile. It also earned him a title—without a scrap of authority or noble privilege. All Sir Thomas gains from his courtesy title are a few party invitations and contempt from the House of Maerton—the very rivals who drove his family from their ancestral land.

When a stranger points out the ruins of Kaituer Castle to Thomas, he cannot resist visiting the home from which his grandfather fled into exile. Now a desolate scene where all may tread—except Thomas. Was he lured here with deadly intent? Who shot that arrow at him? And why, since he is a nobody?

Hovering between the poverty he grew up with and the nobility he is denied, Thomas belongs to neither world. No land will be his, no bride will be suitable, no children will carry his name. Then the king pulls a will from the royal archives. Thomas’s great-grandmother left her descendants a small estate, also occupied by the Maerton clan. They suddenly relinquish it to him. Far too easy. Another trap, perhaps? But how can he decline it when it could be the key to his future? Would it give him the right to join hands with a certain lady? If he lives long enough.

A Castle from Ashes is the final novel of the Castle in the Wilde series. If you enjoy a story where lies hide in plain sight and true freedom must be won, explore this fantastical world with medieval undertones and sparks of hope.
---
About the Sharon Rose
I started writing when I was seven years old. Okay, My Life as a Flying Squirrel may have had a couple spelling errors, but my classmates loved it.
Plenty of life has happened since that first story, and I’ve come to realize the things that fascinate me. People. Communication. Culture. Personality. Viewpoints. Beliefs. Anything that makes each of us beautifully unique. Small wonder that my art spills out in story form.
It was only a matter of time before I just had to share my stories. I publish fantasy and science fiction because they allow vast spaces to explore. My stories weave cultures and characters, who are more than they seem to be, into adventures with mystery, romance, and hope.
When I’m not writing or reading, I may be traveling, enjoying gardens, or searching for unique coffee shops with my husband. We live in Minnesota, USA, famed for its mosquitoes—uh, I mean 10,000 lakes and vibrant seasons.
Posted by Anna Tan at 9:00 am