A to Z, Intense Debate, Character Development and a Launch Party!

A to Z
The A to Z Challenge now has its own blog here: Blogging from A to Z April Challenge. Click join to become a Friend of the Alphabet!

IntenseDebate
I don't know if you've noticed, but I've recently installed IntenseDebate as my new commenting system. I saw it from over at J.L. Campbell's blog and thought oh hey, that looks snazzy! And it solves the reply-to-comment problem I was having. So I hope it works =]
I noticed that it seemed to revert to the old commenting system sometime during the day. It could be because the new Blogger interface is not supported (the how-to guides were based on the old one) so I've switched back. Tweet/e-mail me if you have problems commenting so I can figure out whether to stay with it or not.
Edit: I figured out at least one thing wrong... IntenseDebate does not show up if you use IE. BOO, IE!! It apparently shows up fine on Safari and Firefox so far.

Character Development from the Inside Out
I don't know what took me so long to get onto goodreads but I'm seriously loving it! I've just received a pdf promo copy of Scott Morgan's book, Character Development from the Inside Out for review purposes as part of the WriteHook-A-Palooza event. It's good stuff - the review should be up probably by Saturday. (I'd say Friday, but I've got the Third Campaigner's Challenge scheduled then).

Open Minds Virtual Launch Party
I'm taking part in Susan Kaye Quinn's upcoming virtual book launch on November 1st. I "met" Susan recently via our triberr group, Writer Warriors, and am looking forward to reading her novel!
The party involves:
You can sign up here if you want to join in the fun (the guest post option is now closed, though). I'll be posting my review on 1st Nov itself so remember to check back here AND at her site on 1/11/11 to party with us. :)
She's hosting an ARC giveaway right now so hop on over to enter. Two paper ARCs are up for grabs!

Here's the blurb to keep you entertained:


When everyone reads minds,
a secret is a dangerous thing to keep.


Sixteen-year-old Kira Moore is a zero, someone who can’t read thoughts or be read by others. Zeros are outcasts who can’t be trusted, leaving her no chance with Raf, a regular mindreader and the best friend she secretly loves. When she accidentally controls Raf’s mind and nearly kills him, Kira tries to hide her frightening new ability from her family and an increasingly suspicious Raf. But lies tangle around her, and she’s dragged deep into a hidden world of mindjackers, where having to mind control everyone she loves is just the beginning of the deadly choices before her. 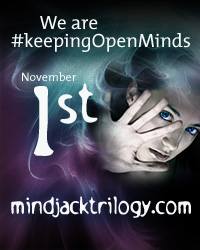