My thoughts on a month of hard writing 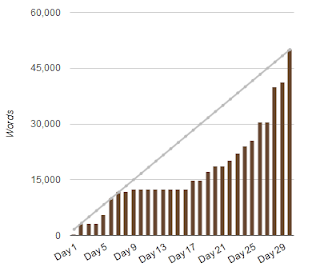 This year's nanowrimo was a great success - I actually reached 50K words by Nov 30! *confetti*
The story is far from completion though. It's going to need a major ton of revision to get this monster anywhere near something I would even let a beta/critique partner read (I don't have one yet, but you get the drift).

A quick review of a month of writing:

Alright, so I'm giving myself a break from writing in December, during which I'm participating in Novel Publicity's Blog Tour promoting three new authors, so watch this space for reviews! Edits will probably start in February (after the craziness that is called January Deadlines) for an older story, not this one.
I'll also be cracking my brain for some ideas for the upcoming East Asia Graduates Conference (EAGC) happening in Malaysia in 2013 - want to get a tentative timeline for publicity as well as draft format for the website and blog in writing by the end of this year. Argh.
ALSO, Project Dance happens in Penang this weekend (9-11 Dec) and I've been busy getting things up in the blog, tweaking the budget (it's in the black, yay!) and thinking of other miscellaneous things at the oddest of times. If you happen to be in Penang this Sunday, drop by at Queensbay Mall from 1pm to 5pm to catch our free performances. :)

And FINALLY, a very good friend is releasing his sophomore album this weekend! Congrats, Josh! More on that in the next post...
Posted by Anna Tan at 1:12 am